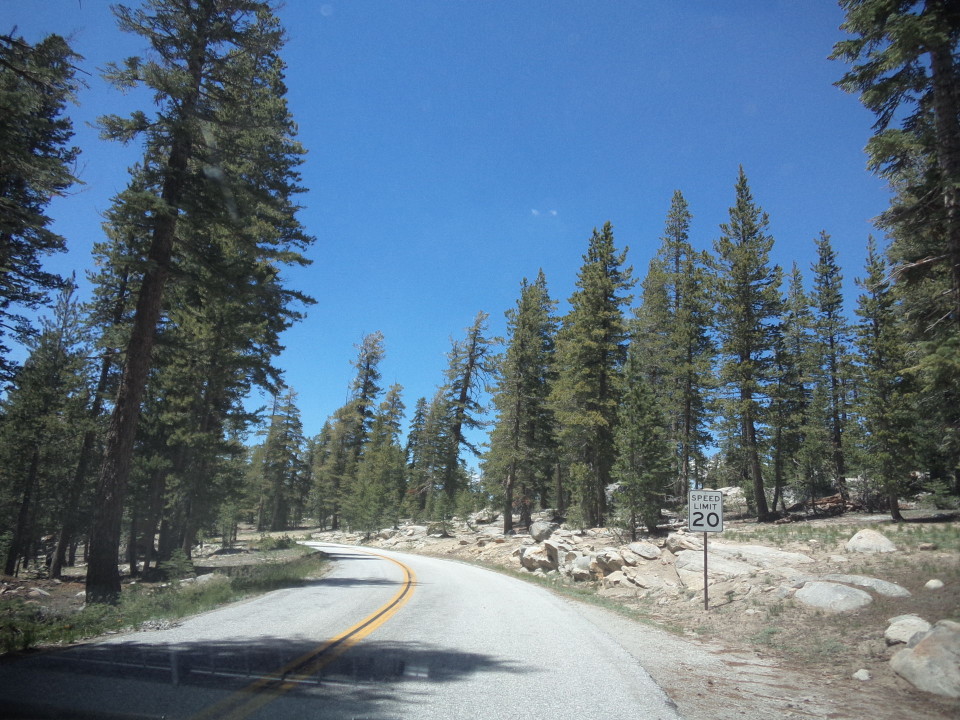 Under advice re avoiding traffic, we set the alarm to 7am, said our fond farewells to our Oakland hosts and hit the road for Yosemite. Kate had her first run of driving in America (loved it): A terror on the road

We finally chanced upon a supermarket, and have stocked the car with snacks. Being able to feed Kate at short notice is pretty important – having food in the car removes the worry!

Heading up into the hills, the trees rose around us. Alpine forests are something I hadn’t experienced, so it was a nice experience. And the roads up there, they’re so curvy, and ride like silk – such a pleasure to drive! Enroute to Yosemite – the Californian drought is pretty awful! Enjoying the roads, a hidden queue appeared abruptly behind a curve. It was the toll for entry to Yosemite – $30 for our family car – it’s a user-pays country! Buy hey, the roads inside the park were even nicer, and someone’s got to pay for it. The lovely road to White Wolf in Yosemite

We parked up next to White Wolf Campground. I enjoyed reading the differences to New Zealand camping – namely, the presence of bears. Each site has a bear-proof cabinet, where you (by law) must put all toiletries, food, cans and everything really. They’re very strict on this, because bears who get accustomed to people often have to be shot – which is stink. So making sure bears know humans have nothing edible with them is important for both bear and human safety.

We didn’t have much time at Yosemite, so we picked a wee 5.4mile return moderate hike to Lukens lake. The walk was lovely – beneath the trees were meadows of blue flowers and there were huge grey boulders scattered throughout. The beauty was bittersweet, as interspersed among the trees were many that were dead and decaying. California has been in drought for four years now. As the trees dry out, they get stressed and the bugs, fungus and bacteria move in, killing them. The walk was well worth it – the lake was gorgeous. Barely another soul to enjoy it too – just us, the birds, the dragonflies and the enormous ants. After our walk we headed in to the wilderness to our next AirBnB. A lovely wee spot run by a charming 82yr old guy called Larry, happy with his 2 month old newborn baby! Pass on that! We relaxed on the balcony, enjoying a read and a brew. As we relaxed, hummingbirds buzzed in and fed from nearby birdfeeders. Magic spot. Relaxing on the balcony. What a spot!