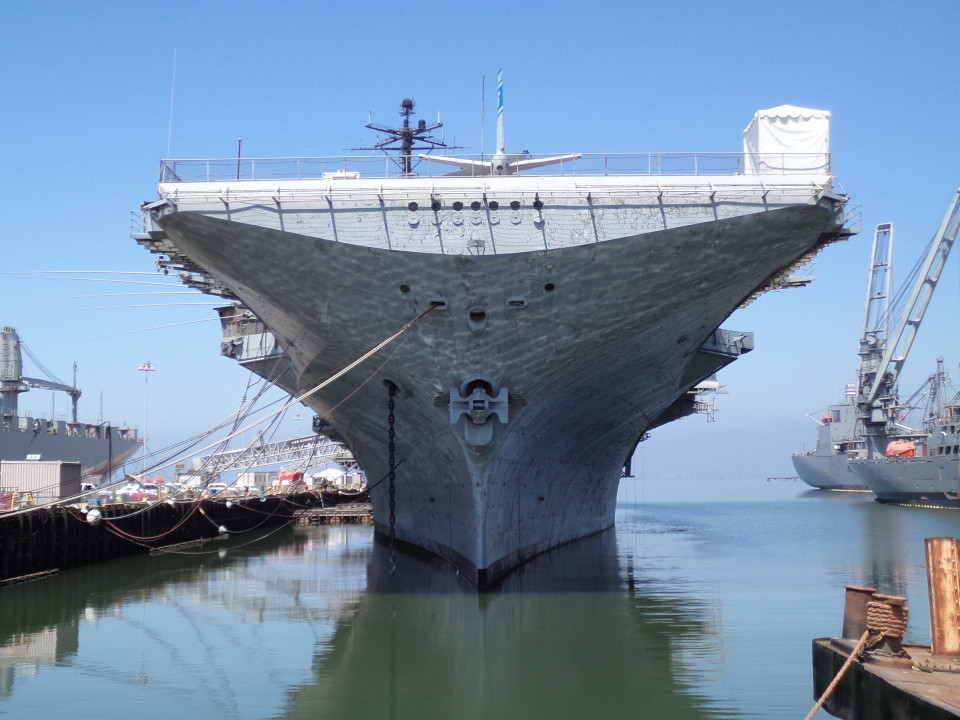 While our time in the US is fairly organised, in San Francisco we just had a few ideas and were generally flexible. So when the old man casually mentioned there’s a great Aircraft Carrier in Oakland, I did some research and there she was – the USS Hornet, just down the road: The Hornet took part in much of the US’s Pacific action in 1942+, and was the vessel to pick up the Apollo 11 Astronauts once they landed back on earth (in the ocean). (That’s the folks who first walked on the moon). So a real slab of history there, and I was pumped! I’d been wanting to see an aircraft carrier for a while, and knew the only place I’d get to do that was the US. Walking up to board was pretty awe inspiring: When we arrived the place was pretty much deserted – the visitors were outnumbered by docents (guides). These docents though, almost all of them were retired navy men who had served on some aircraft carrier or another. Their knowledge of the workings of the ships was wonderful to hear – they were all so passionate and keen to educate too. So interesting and just jaw-dropping. The amount of engineering involved in these things, as we learnt more it really blew my mind. During the war, they built this thing in just 13 months! (It takes almost 10 years to build a modern carrier today). To top it off, the ship sits in a navy yard of sorts – so there’re navy ships all over the place, pretty cool. And the views of the city were pretty lovely too: From the tower, with San Francisco in the distance

Our tour of the bridge was fascinating – as a carrier was often the flagship of a fleet, the interchange between the admiral of the fleet and the captain of the vessel and such was pretty neat. Learning about how the catapults worked to launch the planes (and how the landing hooks worked) was great too – but I’d watched a thing on TV about that before, cause I’m cool. A plane on deck Couldn’t believe we were there!

I didn’t want to miss an engine room tour, so after the bridge we staggered/fell down below deck to get in on time. Two of the chaps on the tour were also American Navy veterans, and the interchange between them and the docent was great to hear. A glimpse into another world.

The engine room – just, wow. That sums it up really. Our docent walked us through the entire process from heating the crude oil, getting the boilers running, generating the steam – then superheating the steam – and then how that was transferred to move the ship – what a process! You see these myriad pipes and valves and levers and without a guide really stepping you through the use, I never grasped the scale of the complexity of these things. What engineers can do! I was left with a great respect for what humans can do when we pull together on a common purpose. Here’s an example, with one of the boilers. Each of the red bits below injects the heated crude oil in to the firebox, which is mixed with air to create a fireball. The fireball heats the water in to steam and then the steam powers the ship. However, you need the right mix of oil to air – and the fireball wouldn’t work if the oil is just squirted in there in a stream. So each of the nozzles has a little fitting on the end, like the end of a garden hose, which sprayed the oil into mist. The thing was, the nozzle was different for every ‘pace of oil’ you wanted. So if the captain wanted to go 25 knots instead of 10, you’d need more fire – more oil. The engineers would have to remove each of those red pins, replace the nozzles with bigger/smaller nozzles for misting, and put them back in, then crank up the oil pressure. And there are four engines, each with six of these things on them. It was all so complex the whole process of changing speed took about 20 minutes. This ship was only decommissioned in 1970! The six injectors on one of the four boilers

You can probably tell – I thought this was just the best. Kate thought it was bloody awesome too! Here’s a picture of the ship ready for deployment back in the 40s, in the same spot she now sits: Visit the USS Hornet if you get the chance!

After that we headed back home for 10 minutes, dumped the car then toddled in to the city to visit Alcatraz Island. It had a tough job in topping the Hornet – but you know what? It failed to do so in every possible way. We had booked a night tour of Alcatraz many months ago, as you need to book at least three weeks early to even get a look in. We queued up, got our stupid tourist photo taken in front of a picture of the island (which we could buy later for prices starting at $20USD!) and it mostly went along in that vein. Ultra-tourism complete with dorky audio guide, gift-shop the size of a pak-n-save, arsey shit compared with what we’d just done. And to follow up the Hornet, this pinnacle of engineering accomplishment which served to protect the Pacific from pricks during the largest war the world has ever seen, with a small prison, a real backward-facing, miserable place – I wasn’t into it. Obviously it’s not a fun place, but the thought that a national jewel like the Hornet is scrambling for visitors while misery island costs twice as much with queues three weeks long – urgh. And we were part of it! Anyway, we got on the ferry and went around the island: The island was quickly shrouded in fog. We were let off the purpose-driven ferry 100 at a time to join ‘tour groups’, and led up the driveway to the prison entrance. Here we got audio tours and then just wandered around the prison. It was shit. The Native American occupation in 1970 was interesting, but barely covered. Ruins of an officer quarters or something At best it’s glorifying criminals, or a poor justice system – I don’t even know why we went really. I guess ’cause it’s ‘what you do’ and ‘there’s a three-week waiting list’. My advice is – don’t bother! Go do, well – anything else – instead.