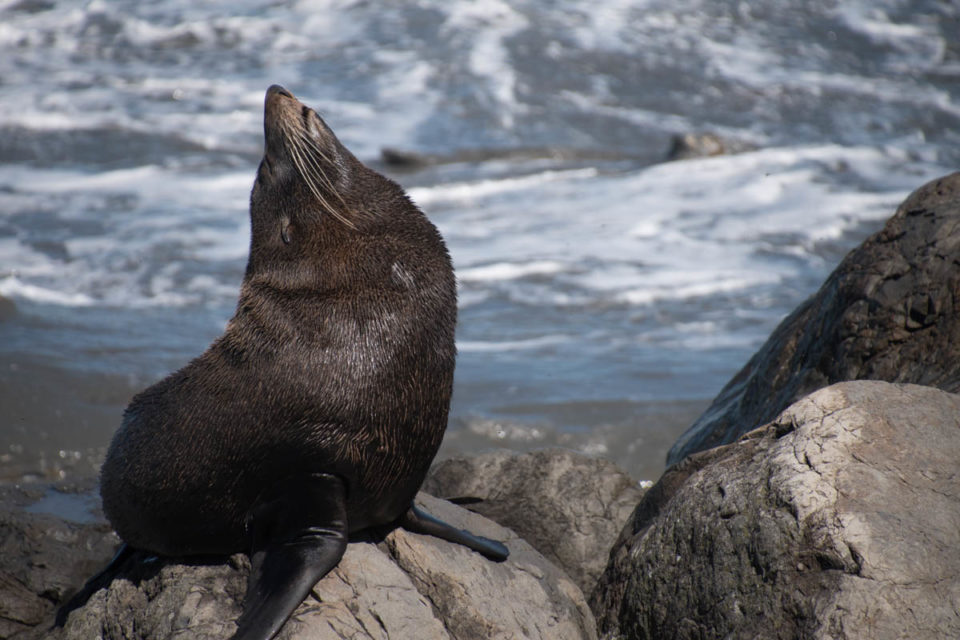 I popped out with some friends to the South Wairarapa coast last weekend to test tents, see the pinnacles and fur seals. This is just a baby post! As with much of New Zealand, in geological terms it’s going up in the world. The Putangirua Pinnacles are formed by the erosion of an ancient gravel scree, with river rocks heading to the ocean. Over the past millions of years it’s moved progressively further from the ocean, and the stronger ‘cemented’ strands of gravels and silt have withstood erosion, now forming fun ‘pinnacles’.

We pitched our tents at the DOC campsite at the foot of the valley and headed up the creek to take a look. Getting bugged with the tents The Putangirua stream, the campsite watersource. Not ‘100% Pure’ on our visit.

It’s a bit of a slog on the meandering stream bed (which must rage at times), but after an hour or so we were there: We then clambered up the neighbouring track to the lookout, which was also a slog, but worth it! From the lookout. You can see how it’s an old scree-bed, hollowed out.

The loop track is really nice and varied, and had us arrive at the campsite with plenty of time for beers, wine and BBQ burgers.

After our burgers and careful rationing of water by drinking beers, we popped over to the beach as dusk fell. South Wairarapa has a rugged coastline, eroding faster than most in this particular area.

Bach precariously ready to fall into the surf at the next storm. Rocks placed to try and slow the inevitable erosion of this property and the coastal road.

Some neat poser I know

Back at camp, we hit the red wine and got to playing with my camera. Many star shots were taken trying to find the right manual focus; it’s a learning experience! We had fun. Wonderful clear skies, many satellites and shooting stars were spotted. The night sky from our campsite By the light of our citronella candle

During the night we heard wild pigs.

We had coffee and a big fry up in the morning, packed up and drove out to Cape Palliser. It was pup time for the North Island’s biggest fur seal colony, and we got to see them all playing in the rock pools. They’re pretty neat to watch! We wandered up to the lighthouse again, had fish and chips in Ngawi and headed back home. If you want to read about that stuff, I wrote about Kate and I’s trip the other year. I’m mostly posting this because seals!