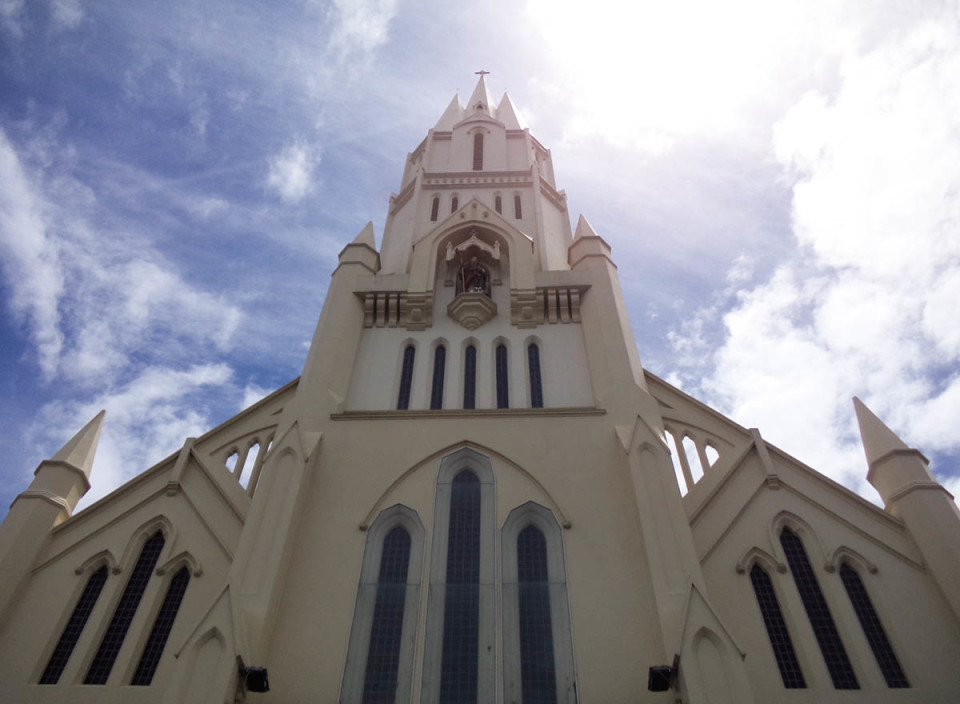 I packed the tent and visited the birthplace of modern New Zealand – Northland – at the start of the year. This post covers the first day of my three-day toddle up to Auckland.

Two hours north of Wellington resides the city John Cleese famously coined ‘the Suicide Capital of New Zealand’, Palmerston North. With 84,000 people it’s sizeable enough but it isn’t on the main drag and unless you’re visiting someone my general understanding was there wasn’t much point in popping in. So, mostly as a means to get to a more interesting road north, I popped in for a look.

The city is based around the central square, ringed by retail stores. It’s a planned town from 1866, named for the then-recently dead PM in Britain. There are still some nice heritage store frontages around the square, hanging in there next to the angled-glass turds of the 70s. For some reason 40 years ago the council’s grand idea was to cut into the square with their brutalist offices, but otherwise it’s quite neat. The round-abouts are dotted with sculpture and there’s a nice garden on one side, a grassy event area on the other. I meant to put a nice shine on Palmy, but when I arrived bogans were descending en-masse for some drag racing weigh-in or something – I was certainly not in Wellington anymore. We have one of these wind-sculptures in Wellington, but yellow

As I came in I saw the steeples of two grand old churches, so I wandered off to peek in. The one next to the square was locked up tight, but St Patricks was open and empty. Externally some of our churches are lovely, but I do wonder if their minimal innards compared to Britain reflect the asthetic of the later build time, the lack of craftspeople, or a lack of money. Didn’t want to try going into this beauty St Patricks Cathedral. What a gem Palmy services the military and has a sizeable agricultural research area, but the main draw for outsiders is Te Manawa – their modern museum and arts centre. I had an enjoyable fossic around, it’s worth a look.

The museum is well laid out, telling the story of the local Maori and their use of the landscape’s resources, then moving on to the European settlement and subsequent plundering. This is a tale all too familiar in most of our museums, and certainly on this trip, focussing on pioneers. The beginnings of a quiet despair, a lorax-esque loathing for how we’ve treated the New Zealand environment in our few hundred years began to creep up on me here.

The area was swampy marshland for the most part, before European settlement. The Maori got about on waterways, and used the flax which grew well in the marshlands for all sorts of stuff. They saw the rivers as arteries for the land, transporting and removing waste etc. With European settlement, industrial processing of flax was taken up for a time, and once all the flax was gone, the area was drained, irrigated and converted to farming. In the modern day, they don’t advertise it, but the Manawatu river is now the most polluted of North America, Europe, Australia and New Zealand and you aren’t even able to touch it without getting sick. All the eels and fish are dead, chuck a few bodies in it and you’ve got the Ganges. You won’t see that in our 100% pure tourism campaign. The museum didn’t try to hide it, and mentioned what was dead, what was dying, and so you didn’t feel like crap, closed with what little anyone is doing about it in a non-timely way.

On the plus side, their art gallery, which I visited to satisfy my completionist tendency more than interest, was actually quite neat. A ‘reflections’ display used mirrors and neon to make some fun infinite views. An arts student had grown a bunch of bacteria cultures off one cup of rancid river water and displayed them. If you have the time, pop in on your way north – it’s a well-done wee diversion. Reflections installation poorly photographed, which means I mightn’t get in copyright trouble.

On my way out I grabbed a lamb roast sandwich from ‘Just Roasts’. You just can’t buy a roast-on-the-move in Wellington, and there was an enormous fat guy in there – I knew it was good, I was in. $6 and that was some mint-sauce lamb roll heaven.

Northeast of Palmerston North is Ashhurst, a dot on the map marking the route over the ranges to the Wairarapa. There’s a wind turbine farm there, the biggest in the country, and a viewing platform, so I thought I’d take a look. Upon arriving, the viewing platform is just the second-story on a local sports field changing room – it’s a sad affair, at least a few km from the turbines. It amused me in a ‘I am fufilling my contract obligations’ kind of way – they certainly found a way to make these enormous structures boring. But this was just a diversion from the main reason for this trip inland – the wacky route north on the Pohangina road. This is a scenic route moving up to Mangaweka, where it rejoins State Highway 1. Regrettably at the time, I missed a turn and ended up on a gravel road, without map nor cellphone reception. I suspected it joined up again later, so I toddled on as the road got worse and worse. I wasn’t worried though, aside from the wasted time – doing this dumb stuff in the van was a concern – in the Jazz, it was a breeze! And as Mr Frost said – it made all the difference. Nice to see the locals’ roads, to see real farming off the old SH. Always follow your satnav when it suggests a ridiculous route – they’re always more interesting. Not a state highway. The other benefit of these wee roads is that you can just stop and enjoy the view, no-one is around. I drove down a big gorge and up the other side, surrounded by grey clay stone. I watched a hawk get run-off by magpies, before realising they’d come for me next and scurrying back to the car. I saw a dead sheep. You don’t get that on the main road.

After rejoining the main drag, what I did get was a lot of flashing lights from motorists passing the other way. That’s the universal code for ‘speed camera ahead’ – so we all slowed, and kept an eye peeled. Nothing. for kilometres, nothing. Yet people kept flashing, more and more urgently. I was baffled, until the car I was following came to an abrupt stop at the base of a long slope – a tree had come down. I hope it was cleared before a loaded truck came down, its brakes may have struggled! Tree down on SH1 Ruapehu popped out briefly on the desert road

In the evening I dropped in on my friend’s great spot on Lake Taupo, pitched my new mid-size tent for the first time (you do really need at least three tents) and was treated to a burger. I slept like a me, happy as me. After some pancakes in the morning (pancakes!) I cranked on up to Waihi, the living hub of goldmining in New Zealand.