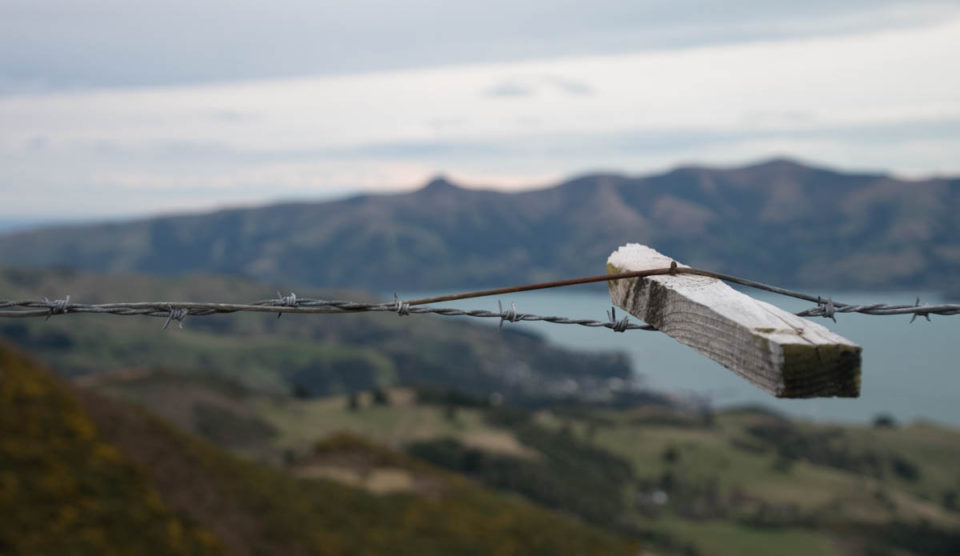 I hustle down to the cafe on Scarborough beach, order $8 chips and watch a man throw a ball for a dog. I think of visiting Scarborough beach in Britain with the other side of my family, in similarly shitty weather.

Jumping back in the car, I head up the steeply inclined hill; it’s the start of Banks Peninsula, the only height breaking the Canterbury plains, the hard-rock remains of two enormous volcanoes. I am heading to Taylor’s Mistake, a popular surf beach.

I’m not surfing. I just want to visit where my Grandad and Nana first met, in the summer of … the early 40s maybe. I find a layby above the cove and sit, eating my chips and imagining what it might have been like back then. I wander out to the deserted beach chasing an elusive moment; the wind and rain ensure I’m quick about it. I continue around the coast and visit Lyttelton. What I find is very reminiscent of a small English fishing village, unfortunately perched above the largest port in the South Island. I weave my way around tiny hillside lanes, more ridiculous than the hill climbs of Wellington even; I can’t wipe the grin off my face. It’s so unexpected and out of place, I am tickled. Lyttelton Lanes. It would appear I never took a photo of Lyttelton properly

I toddle on around to Corsair Bay, and stop to admire the water. The deep harbours of Lyttelton and Akaroa were the calderas of the ancient volcanoes; now eroded to open to the ocean. I find it amazing to be driving around the interior of a volcano. The rain eases and I wander. There is not a soul about, it is a lovely moment. My mind is scattered, all bigger than myself. My history, my ancestors, my purpose; I find myself encouraged on in my revere and keep pottering along the coast, not particularly bothered where it leads. I’m on an old army road, built to service a gun battery and a torpedo boat dock built in case of Russian invasion. I reluctantly return to the car but am not done with my existing. I drive around bay after bay, stopping often to enjoy the varied views of the inlet. Saving the rest of the peninsula for the coming days, I return to Christchurch, dropping in to the Wigram Airforce Museum. Wigram used to be a sizeable airforce base, but I arrive to find a residential area, still too new to have a slither of soul. ‘The Runway’ spans the suburb, with ‘Kittyhawk drive’ and so on reminding one of what was. The Airforce Museum is all that remains, a bunch of aircraft hangars without a runway.

I enter at four and am encouraged to be swift before the 5pm closing. An hour was plenty it turns out, as a private event had closed half the hangar. I sat in a Canberra cockpit and you know, planes and such. All rather plane. Heading back to the hotel I find Christchurch rush hour is fast enough, but as I time-and-again have to recircle back after missing random one-way streets, a little rage grows. Eventually I nab the last car park and have a roast meal at the pub. Well fed and watered, I’m pretty impressed with Christchurch and surrounds; the outdoors is wonderful and I retire looking forward to exploring further.

I leave my windowless cell at 7am; it’s miserably depressing in there, and I have a lot of exploring to do. I am heading to Akaroa on the other side of Banks Peninsula, and head there over the Dyers Pass road.

Dyers Pass, before it was a highway, was a local MP’s dream project for British walking. Every 20km or so was to be a grand pub; only a few were built, and none so grand as the Sign of the Takahe. It’s a wonderful building, it’s strength of character enough to see the history of the route, rather than the suburban sprawl that surrounds it now. Unfortunately it’s surrounded in fencing for earthquake repair so I am without breakfast. I continue on and pull off at a layby in Governors Bay, headlights off to avoid waking the numerous campervanning tourists scattered about. It’s sunrise and low tide; the light shines on the mud flats, wading birds pick through the mud. It’s beautiful, and I enjoy it alone – I am the only tourist to notice. Gotta be some reason to get up early

It’s beautiful driving and I arrive in Akaroa famished. I find no newspaper to accompany my cafe breakfast but one struggles on.

Akaroa’s quirk is as an outpost of the French. An area of land had been bought from the local iwi by a French Captain. By the time 40 French settlers arrived in 1840 the British had got wind, toddled down and claimed the area for Britain. So while many of the early European pioneers were French, and Akaroa prides itself on this point of difference, it was never ‘French’. But it’s a touristy French – flags fly, service is poor and mimes wander about with berets and baguettes under-arm. It’s very cute, a historic little dot – a bit like Russell up north and a similar vintage. Nothing is open (I am consistently early) but I notice a walking trail pamphlet in the local 4 Square. I save the $5 and look it up on my phone (what a dick!) and explore some short walks. I head to a historic cemetery and I’m the first out there, startling Silvereyes and sharing terror with kereru who fall from trees on top of me with a whoop. It’s the first French cemetery; unfortunately the stones (possibly wood) weren’t there long; just a memorial stands now. Little bud on the trail

Back in town, the town museum has a good read. Quite a lot is known of the first French settler ships and the Iwi (tribe) who live/d in the area. The isthmus where a fortified Pa sat (Onawe) reminds me of Matiu/Sommes. Further on I pop into the Garden of Tane, a much-loved forest with other historic cemeteries. After a stroll I return to the car and unsling the camera from my shoulder. A zip gets firmly stuck in my hair. I battle with it some time, horribly embarrassed despite no onlookers. I eventually tire of it and rip the zip from the strap. Better than a bald spot.

At the road end is a small settlement, Onuku. There’s a Marae, a few houses and a wee church. I park a while and read the Akaroa Chronicle. On the wee bridge over a creek three Kereru (wood pigeon) sit. A couple and a lonely rando. I have a nice moment out there. Inside the wee chapel (Kaik)

I pick a quiche up in the township and head up the hills to the Summit Road, for the scenic route back to Christchurch. Not a soul joins me on this road; it’s just me and the views, of Akaroa, across the Canterbury Plains to the white tips of the Southern Alps. I stop at a little DOC parking campsite (deserted) and walk up to a lookout, among a small patch of native bush. Up here you can see the shape of the landscape, the enormous ancient volcanoes. It’s humbling; we are so small. Many a lovely spot The Alps beneath the cloud

The road flows on – it is wonderful driving with very distracting views. I wind my way toward the small settlements on the Northern side of the peninsula; Pigeon Bay and Port Levy. They’re barely settlements, and the access must be mostly by sea; the one lane gravel road is little more than a farm track.

As I descend toward Port Levy, the only other traffic I see is a full-size firetruck, lights shining, hooning toward me on the opposite side of the valley. I pull over so far the car teeters on the cliffside to make way. Yet the truck still stops. ‘You local?’ shouts a fireman. They’re eyeing up a small brush fire on the opposite side of the valley. It’s so small I assumed it was a farmers’ burnoff – fortunately it fizzled. I carry on back to Christchurch, for another evening wander and some pub grub. Tomorrow I head to Ashburton to visit my Grandma. From the Port Hills down to Christchurch, with the alps in the background. So tidy