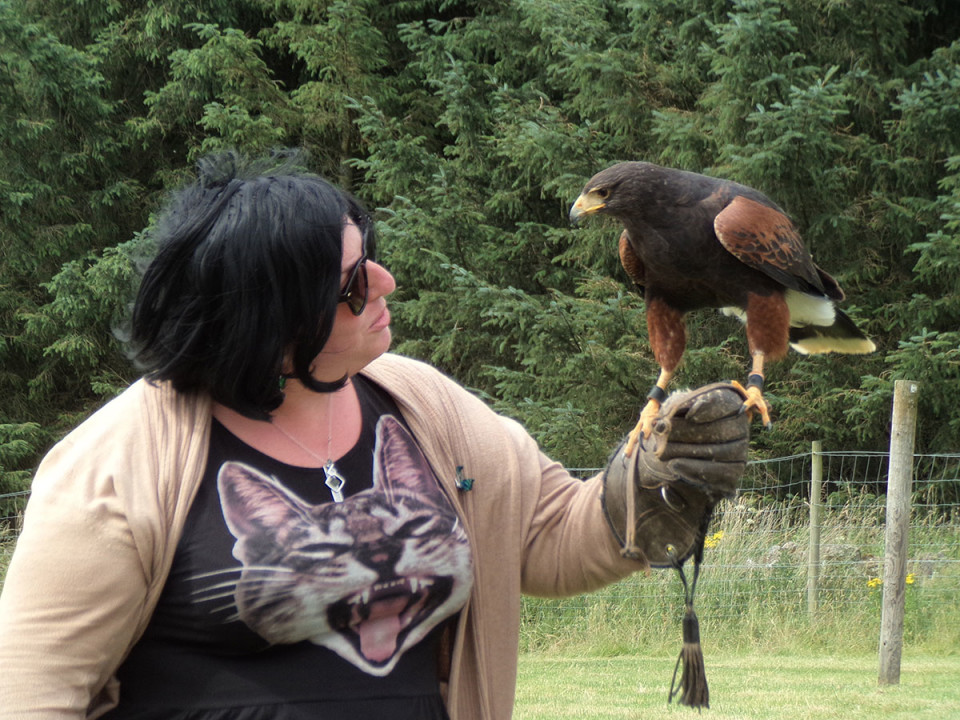 We had another chilled out morning reading in bed – we’ve been doing that a lot lately – then headed in to Huntly for supermarket and petrol filling action. Kate was loving all this National Trust property action, but I was getting Castle-fatigue. To battle this, we noticed a popular nearby Falconry Centre. But before a show was on there – that’s right: one more National Trust property. Leith Hall: We tacked ourselves on to a tour that had just started, and were led around the building. In the hallway there was a big portrait montage. At one point the Laird had taken everybody who lived on his estate to Aberdeen to have their picture taken. There were many mighty beards. Our guide told us when she started volunteering there, she discovered two of her great grandparents were on the wall! So that was fun.

I can’t remember much else, and again – no photos – but we did like the Victorian music room. Deep purple wallpaper with red velvet curtains, thick dark carpet and dark wood trim. We have been increasingly inspired by these rooms and now we hope to re-kit the office at home to be something more like this when we get back – though cheap and cheerful of course! A nice room to take a dram, discuss politics and read literature, what what.

So that was that – a quick bite in the van and we were off to the Falconry Centre.

I’d never seen falconry before, and it was a mixed experience for both of us. It was wonderful to see these birds of prey, such graceful deadly creatures, up close. But to see these masters of the sky shackled to the earth was just sad. Another instance of man dominating and finding sport in subjugating other creatures – we weren’t that happy to be helping fund it. The Bald Eagle was particularly impressive and depressing: Shackled bald eagle, out on display. When the falconry demonstration began, we all flocked (oh yes!) to the seating. Kids were in abundance.

First the chap brought out an American Harris Hawk. He was pretty neat, he’d swoop about and grab bits of baby chickens from the trainers glove. Absolutely useless for actual falconry (since he just gobbles off gauntlets all day) but quite the crowd pleaser. To the crowd’s excitement, we got to have a go holding the glove. And by we, I of course mean the kids – even those who didn’t want a go. Though later on, once everyone was well and truly bored of it, a couple of mums (and a grandma) got a turn, no men ever did. Could you be the first man to take a turn from a kid, even though the kid had had five turns already? Fuck kids. Kate got a turn though!

Next was a barn owl, native to Britain. Yes they can do stuff during the day; they’re just too slow to catch anything! He was pretty marvellous, his name was Smudge and we could pat him. He flew just like in the Labyrinth opening credits. Kate said he felt like a cloud. At some point a deer came in to the paddock, a very tame deer – and wandered about getting patted. At points it felt like we’d visited a petting zoo, with kids running around patting everything.

The final demonstration was from a falcon, a cross-breed between a something and a peregrine. He’d only perform for the woman falconer, and he was pretty speedy. The performance was completely unnatural, with the falcon swooping around and around in circles, attempting to catch a dead chick being spun on a cord. When finally allowed to catch the prey, he was very out of breath – it was strange to see a bird of prey out of breath, panting away; in the wild they seem to do their all-in dive for a kill – way less effort.

Falcon with his chicken prize After that we drove about 10 minutes to camp out at Bun wood. There was a wee track for runners, dog walkers ‘n that and I wandered off down it. En route I met a chap who moved from Tauranga 25 years ago. Small world. After the walk I joined Kate in the van, and we set about a busy evening of reading and drinking tea. From the corner of her eye, Kate spotted a red squirrel in the trees right by the van! He stuck around for ages getting rained on – SO CUTE. Kate kindly supplied some of the images in this post. They’re the good ones. (Don’t buy an Olympus camera like me, they’re garbage).