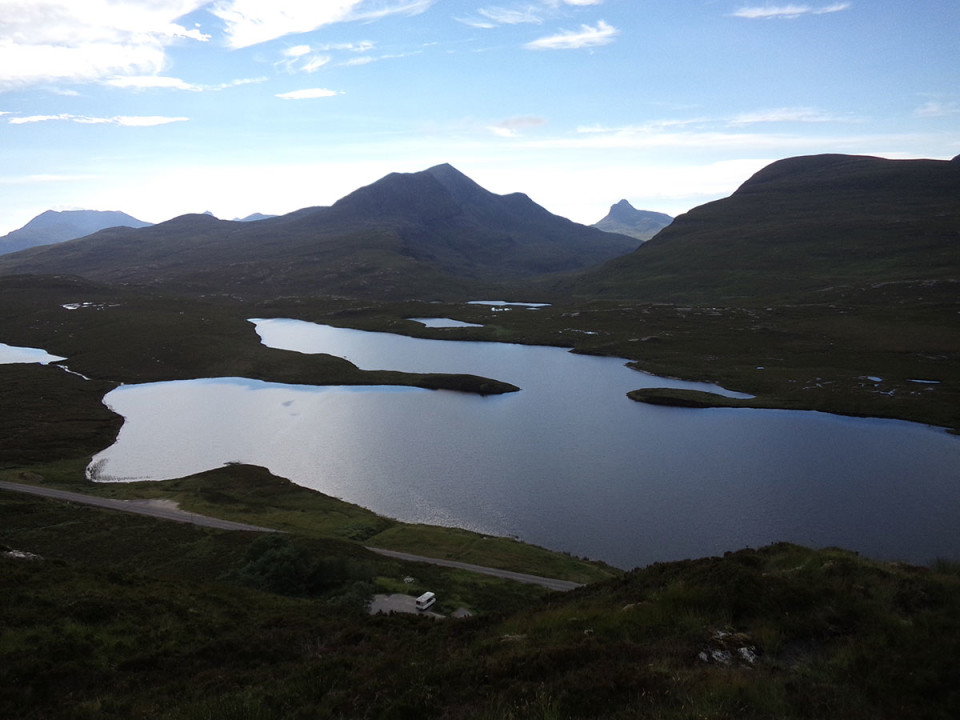 After our wonderful experience with our layby buddies in the morning, we headed up north – into the beautiful wilderness of the highlands. Even in our lumbering Dotty the roads were bliss to drive, and the weather gods were in good spirits: Heading to the highlands – not a sausage around. But one of many wonderful viewpoints

We passed through the town of Bonar Bridge, named for the bridge that crosses its large but so tranquil river: In this wee park before the town, a caravanner had just plonked on down for the day. Cheeky buggers, but who could blame them really: Our first destination was the Falls of Shin. We were hoping to spot Salmon jumping up the falls on their way upstream to breed. Exciting! When we arrived there was a 200+ vehicle carpark, all but empty save for one sad looking burger flipper in his diesel powered box. There used to be some horrendous tourist attraction here, but it burned down in 2013. The falls survived though, obviously, so that was kind of nice really. As we wandered down to the falls, I wondered if we’d come across some dicky turnstyle that’d only move for a pound or two like in England – but nope, Scotland doesn’t roll that way.

The Falls of Shin might’ve been named so for the distance of their fall – they certainly weren’t overly lofty. We, along with many others, stood and stared at the churning water, hoping for a glimpse of a salmon making their epic journey to the waters beginning. The Falls of Shin – see the Salmon? (there isn’t one)

It was hypnotic; often you’d stare so deep into the swirling maelstrom that when a fish did make a leap, they’d be gone again by the time you could recognise it. We saw a couple of fish there, sure – and enjoyed the studied movement of water – but it wasn’t quite as amazing as we had hoped! We jumped back in Dotty and headed off to the next spot – the Achness falls.

Poorly signposted (to the point of not) we thought it must be arse. Down tiny lanes we squeezed the van, and we were on the brink of giving up on them when we spotted the tiny access path. We parked nearby and followed the trail – and crikey, what a spot! The rocks were a rich and interesting red, the undergrowth mossy. It was as pretty as a picture – and we were the only ones there! It was wonderful. All the more so when we noticed this: We saw more salmon making the trek upstream in two minutes here than we did in 15 at Shin Falls, and it was so much more natural. No heavily worn paths and barriers, just slightly trodden earth. A wonderful moment for Kate and I – we were so excited as we saw each leap. What a gift for us, to get this to ourselves. We spent hours. We explored down the stream some, and things just got more gorgeous. There’s an old cemetery there too – what a place to be dead! We had lunch, then returned – Kate wrote a poem and I tried to sketch the falls. A bit ambitious a first sketch – I think I’ll just try a banana next time.

A chap did eventually come by – this was his favourite spot. I asked if he’d seen the fish migrating. Kate showed him a picture of one she snapped, and he commented – ‘that’s a fresh one, you can tell ’cause it’s silver’.

We thought that a daft statement – of course it’s fresh, it’s alive! Only later did we figure out he meant it was a fresh water fish.

Alas we had to carry on, so we left the chap to enjoy his own private moment and travelled more wonderful roads. Over the treeless alpine plains

Eventually we arrived at Knockan Crag, a place of geographic significance. It was here in the late 1800s that two geologists figured out how older rocks could be on top of younger rocks – they theorised on tectonic shifts. That was pretty special in itself – but it was also beautiful! Me chatting with the geologists There was a small learning space there – again, non-vandalised. It even had speakers and touch screens and stuff – interactive exhibits – what’s with people in the highlands not destroying publicly accessible property?! Wonderful. It was entertaining and educational.

There was an option to do a wee walk up the hill and around, which we did. Along the way were poems about the age of the earth, the surrounding landscape, and rock-based art installations. Excellent execution! The view from the top, with Dotty!

At the car park, a sign titled ‘Attention Campervans’ had us worried. But on closer inspection, all it said was – ‘why not stay at the campsite two miles down the road? Support local businesses’. We took this sign as tacit acceptance that it was OK to stay in the car park for the night. How could a campsite possibly compete with that!

As dusk settled, clouds of midges (sandflies) descended. We’ve always heard stories of midge hell in the highlands, but until now we had never encountered any. Boy are they horrible! Fortunately I had some old repellent in the van which seems to (mostly) do the trick, but we battened down the hatches and prayed for morning after a time. In the morning we inspected our various and plentiful wounds, slowly learning that a bloodsucking midge only 1mm long can access your body pretty much anywhere.

With the dawn swarms still swirling around the van our morning wasn’t quite so leisurely, and we rolled out fairly early.

The midges are a blessing and a curse. Without them the highlands would be as populated as elsewhere, but they are awful little buggers. I respect them though. I like that these wee beasties still have the ability to bring humanity to its knees, to tell us where we can and can’t be. Would that more of the planet had their protection.

The road was lovely as we headed for the Measach Falls – within a deep gorge. There was a coach load of Europeans looking miserable and not walking on the left when we arrived, and the midges were a bit of a bother. There’s a swingbridge over the falls, and they do fall quite a way. But after the private beauty of the Achness falls yesterday, we weren’t quite as enamoured at this tourist hotspot – though it is mighty impressive! We did some more lovely driving to our campsite of the moment – a lovely spot near the Isle of Skye (Morvich). It’s all right for a campsite – local bread and eggs on offer, a herb garden to raid, and surrounded by the great hills of the area. After a rest day yesterday (all day blogging), today we are off to Skye!