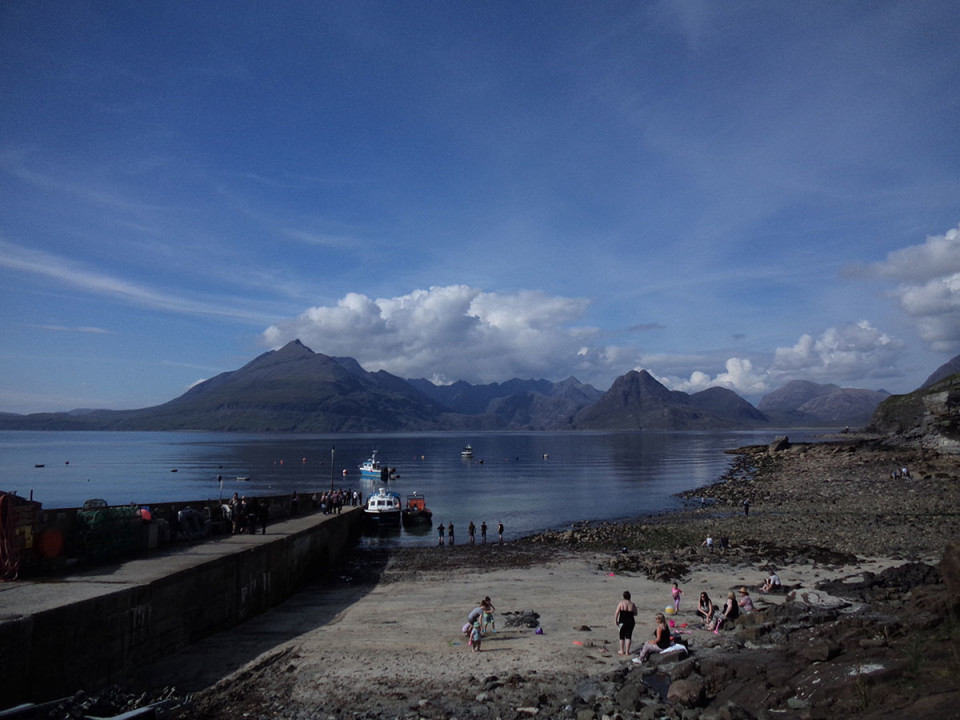 We’d heard a lot about the Isle of Skye – ‘it’s so lovely’ and such – so we had to go have a look. It is also one of the only Scottish isles with bridge access, which was another seduction for us cheapasses in a van! So off we went.

On the way we passed by Eilean Donan Castle, one of Scotland’s signature castle spots – it’s on the front of our touring map! And it’s quite a spot, on a wee island – but for £9.50 each and chokka with coach tourists we decided not to visit. We revictualed at the Co-op at Kyle of Lochalsh right by the Skye bridge. Here we got our first taste of selfish European tourists, who were everywhere on Skye. An unfair generalisation probably – but a lot of the other tourists were selfish dicks, and they mostly came from Europe. But more on them later! We laboured Dotty up and over the Skye Bridge, and there we were – in Skye.

Toddling inland, we got petrol at Broadford, a town with “a traffic problem and a charm bypass” as our guidebook described it. The gas was reasonably priced though, and we toddled just out of town to relax. We hadn’t actually relaxed much at our previous campsite; writing eight blog entries was decidedly unrelaxing, and we both agreed we could have used another night! So we decided not to do much our first night. Inevitably I got curious and wandered up a nearby trail, which turned out to be the Marble Trail, following the track of an old railway for marble quarries. The views of the nearby hills were wonderful, there was barely a soul around and I got a taste of being alone in the wide open spaces Skye is so famous for. View from the Marble Trail, Broadford

Later in the evening I ran some of the trail and Kate walked it. I saw a local walking their dog on my way back and thought ‘oh Kate might get to pat the dog’. Very much later on when Kate got back to the van it turned out she had indeed patted the dog – and had invited the walker in for a cuppa. So we got to meet a local from Broadford. A lovely gal, she shared with us some stories about selfish motorhomers and local troubles – good fun. When she said she came from Broadford, Kate repeated the charm bypass line from our guidebook – it is not entirely clear why.

We had a lazy morning then headed south to Elgol. We’d read the road was lovely, and it was – sweeping around lochs and mountains and cute cottages – and the remains of others. Elgol is a small fishing village, now more focussed on ferrying tourists to Loch Coruisk within the Skye Cuillin mountains. There are two ferry operators at Elgol. The wharf is tiny though, only big enough for one boat. Our local friend had told us the operators had come to blows on the wharf in the past because of this, and which was the local outfit. When we got down there he did a great sales pitch and because of this and a desire to support local business we took the ferry.

En route across the water we saw porpoises diving, and we were on alert for spotting a basking shark – unfortunately a no show. It felt like a ‘Welcome, to Jurassic Park’ moment as we got closer to these great mountains, shrouded in a blue haze. You can actually walk around to the Loch, around the coast. There’s one bit that’s a trick though, “The Bad Step” – a massive rock outcropping you have to creep across, feet in a small crack, with a 6m drop to the freezing sea below if you slip. We were glad we took the boat! We toured around the bay a little inspecting the cute wee seals and bird life, then headed in to the sheltered bay. A few yachties were there too – looked like a lovely wee spot. On dry land, we scrambled over the rocks to see the Loch. Tidy! In the evening we headed up in to the hills for a free camp. The cellphone reception in Skye is patchy at best, so we weren’t sure what we were going to get with the spot. Turned out to be the best spot we’ve ever had! In the morning we toddled off to the nearby Talisker distillery. Talisker is the only distillery on the Isle of Skye – and they play it up some. Sadly, all the distilleries are now owned by either of two conglomerates, and no site seems to do all its own thing much any more. At Talisker, that signature smoky flavour is not done on Skye any more – it’s done at another distillery somewhere on the mainland. All the distilleries are excellent lessons in marketing, and this was more of the same – but our poor tour guide had only Kate and I as English speakers on her tour, so it wasn’t the best! The whiskey was lovely though, so we bought some – and some glasses to take home. After this we wanted to go do a walk. Our guidebook had suggested an ‘easy 5-mile return hike from Glen Brittle’ was a good introduction to hiking in Skye – so we drove down that way.

En route we passed the fairy pools – famous fresh water wild swimming pools. It was a nice day, and every other bugger had seen these too. Unfortunately, the car park was overflowing – and everyone was parking along the steep one-lane road to Glen Brittle, despite the signs saying not to. So it was a risky business, dodging cars and swimmers. After a few reverse hill-starts to let other cars get up the road, we reached a spot where there was a passing place (a specifically widened wee bit of road so cars can get around one another) – three selfish bastards had parked in it. So when we reached this point, of course another van came up and we were at an impasse. I couldn’t reverse 200m up hill on a tiny lane, Dotty sucks for that – and they hadn’t the appetite themselves. After sitting a bit, a French lady got out of the campervan, went around Dotty and said we could go closer to the cliff edge. I looked at their car – it wasn’t even off the asphalt! Those selfish pricks would rather we slid down the bank than get some gravel on their tyres. Uncool – but obviously the illegal parkers were to blame really. Selfish twats parking in a passing place to save themselves 5 minutes’ walk, not caring that while they’re swimming, their parking is causing anguish for every hapless driver on the road. I would never park like that, never – complete selfish bastards.

On our way back later, we had a nice moment while doing the shuffle with this motorhome. We both mimed pushing this green car over the bank and enjoyed a wee shared chuckle – it’s hard enough getting a motorhome around without this sort of crap. We should have pushed this car down the bank.

When we got to Glen Brittle it was a right bastard parking there too. If it weren’t for the knowledge we’d have to re-run the gauntlet by the Fairy pools we might have given up. As it was, we took Dotty off road onto some farmer’s mulch pile, ate lunch and started our walk.

I’d advertised the walk to Kate as an easy walk to a lake. How lovely! However the truth was that it was a relentless exposed 600m mountain climb. The views from the top were lovely though! Low on the trail. Great campsite on beach below. Dotty is the wee speck above Kate’s head

As we neared the top, Kate, struggling, asked a returning English couple ‘are we nearly there yet?’ – the woman flat out just said ‘No’. The man was a bit nicer, saying ‘Not too far – and it gets less steep’.

It was the complete opposite, as shortly the track turned in to random scree climbing on loose boulders as tall as Kate’s stride. I’m sure they were very impressed with their wit, but they just came off as complete bastards. There were nicer hikers too though, encouraging us on – and as we climbed the last boulders and caught sight of the wee lake, it was well worth it. From the crystal clear waters of the lake Other side – dots on top are hikers, they came down the scree slopes in time

Returning to sea level, we popped in to the campsite shop and bought ice creams. Mint Magnums have never tasted so good.

For the evening, we parked near the lovely spot from the previous day – but in a wee gravel pit next to a creek. Because they need ploughs and snow-dumping spots over winter, there are plenty of wee secluded and random spots to park a campervan overnight in summer. Creekside spot for the eve

In the morning we decided to blast around the Trotternish area in the north. We toddled up to Dunvegan to catch a glimpse of the Dunvegan Castle, but they’ve blocked the view well. Looking online, it looks OK – but again, not £9.50 OK when you’ve seen so many already. So we carried on. We saw some nice crags and enjoyed the drive – saw the Isle of Lewis from the coast – and just enjoyed the journey. Biking’d be nice too on a good day! We saw the Old Man of Storr – a prominent crag of rock. The carpark was chokka, the path to the Storr looked like you could climb it in a motorised wheelchair. After our earlier experience, we figured we could see it well enough from the road. The Old Man of Storr on the left – looks better with the natural context!

Skye is lovely, but the volume of tourists was quite offputting. We’d done a hike, we’d enjoyed some landscapes but we didn’t want to stick around for the sake of sticking around – our time is running out! And we hated the midges, we were getting about three new bites each night. So we enjoyed the drive through such forbidding beauty on the way off Skye. As we left the clouds rolled in, the rain came down and now we’re back at a campsite relaxing. I only have to write one blog today rather than eight, so I’m actually going to get some relaxing in today – yay!

As for the future – when we’re done here we’re going to start heading back to Somerset, visiting friends on the way.