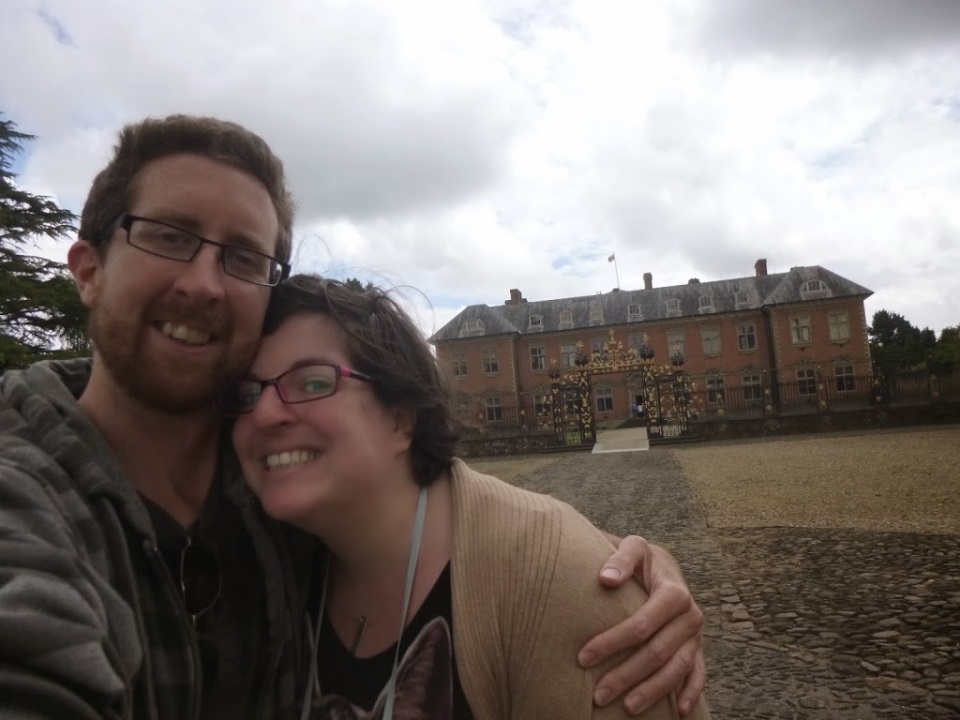 My wee Wales tour with Kate started in a rather subdued fashion, with us camping at the Tredegar House Caravan Club site for five nights (just west of Newport). I had to prang out some contract stuff and Kate worked on her book – not a bad wee week but not a lot to report! But as it drew to a close, we ventured down the driveway to Tredegar House.

The house has been the home of the Morgan family for 500 years, and is well restored throughout. It was nice to be touring again instead of toiling away behind the laptop! And it was lovely to share it with Kate – we clowned around a bit. In the morning we headed for castles. Our first stop was Usk, whose castle was said to have a different flavour from others. Signs for an open garden festival, and an Usk music festival, had me worried about a park – which turned out to be well founded. After driving through the town and out the other side without a park to be seen, I was Usking myself why we bothered! So heading back, I tried a last-ditch residential street and we found ourselves a wee spot.
Usk castle is privately owned and is maintained a little differently from the CADW method (CADW being the ‘Welsh Heritage’ trust here). The castle is accessed via a tiny wee winding garden path and it’s walls are covered in Ivy. Inside there’s a vege patch, chicken coop, outdoor wee chapel and other cute things. Below on the lawn the Usk Youth Brass Band was pranging out popular tunes – it was all rather lovely!
Driving on through the hail we arrived at Raglan Castle. This one was more ‘typical’ but quite wonderful. Lots to see and explore,  the inner massive keep thing, last-ditch defence, was a highlight. Unfortunately it was destroyed after the castle surrendered following a siege during the civil war, when the parliamentarians set up mortars on the other side of the carpark. The kid running around going ‘BEEDLE BEEDLE BEEDLE’ was also fairly entertaining! In the evening we took Dorothy up one of the dodgiest wee one lane lanes to date. I let a local chap pass me, and then continued to follow him. The passing bays were few and far between, and sure enough he came across some guy coming down the hill. Who would bow down and reverse? They were at a stalemate, broken by Dorothy rounding the corner. So the downhill chap reluctantly reversed uphill a way, and we did the old ‘car shuffle’, with him kindof being at an angle into the passing notch, as the other guy tucked in – then both moving, inch by inch, by each other. He then had to do the same with me, and my clutch was about as happy as the chap by this point! Finally getting by, we wound our way up the hill and passed our directional buddy who’d won the stalemate – his grin said it all. That other guy was a plonker.
After some more nerve-racking first-gear corners and things, we arrived at this wonderful scenic layby, looking out over the town of Abergavenny. We parked up and had not a soul pass by the entire evening – aside from two cyclists commending our spot for the night! With the lovely view we had a nice dinner (Kate’s an ace in the kitchen) then spent the evening watching Memphis Belle  and drinking whiskey. Spot on. In the morning we rolled up up the hill to even more impressive viewpoints – one of which was to be that evenings stay. At the top we parked up and walked 20 minutes to the Blorenge summit, and were treated to gorgeous 360 degree views all around. (There’s something that rhymes with orange folks!)
We found a much easier way down the other side of the mountain, and headed to the nearby Blaenavon ironworks. They have a great presentation in one of the old foundry buildings, of the process of smelting the iron. Lightboards in the sandy floor show the molten metal forming the iron pigs, pretty neat! Leaving the presentation, we saw the blackbirds roosting on the foundry stacks in a right old flap. An eagle was swooping in and grabbed a blackbird chick while we watched! Quite the nature show, it overshadowed the history of the place a bit!
A great aspect to the ironworks were the workers cottages – that square of white buildings. Some were set up in various periods, 1920 – 1970ish – and you were able to just poke about! Kate fucking loved it, rummaging the drawers, playing the piano – while I just cringed, CRINGED – hands in pockets. It cannot be allowed! But sure enough, all good. Just real hands on, time-warp kind of thing – awesome.
Up the road was the Big Pit coal mine. This mine closed in the 80s (?), but now it’s the poster child of Welsh coal mining heritage. Part of the free tour involves surrendering all your battery-powered devices, donning hardhats and headlamps, climbing in to the shaft cage and entering the mine. An ex-miner showed our wee group around the mine, seeing how the mine changed with technology and improving safety knowledge. The most chilling part was visiting the pit pony stables – those poor ponies! An amazing experience, a must visit.
As we left the Big Pitt enroute back up Blorenge for another evening of wonderful views, we passed the Rhymney Brewery – surprisingly still open at 5.20pm on a Sunday! We picked up a sample of each of their catalogue and settled in for a lovely evening up the hill.
Loving being able to share the adventure now, so much more relaxing and fun! It was good before, but it’s just great having Kate on the trip! LUCKY CHAP.
United KingdomWales