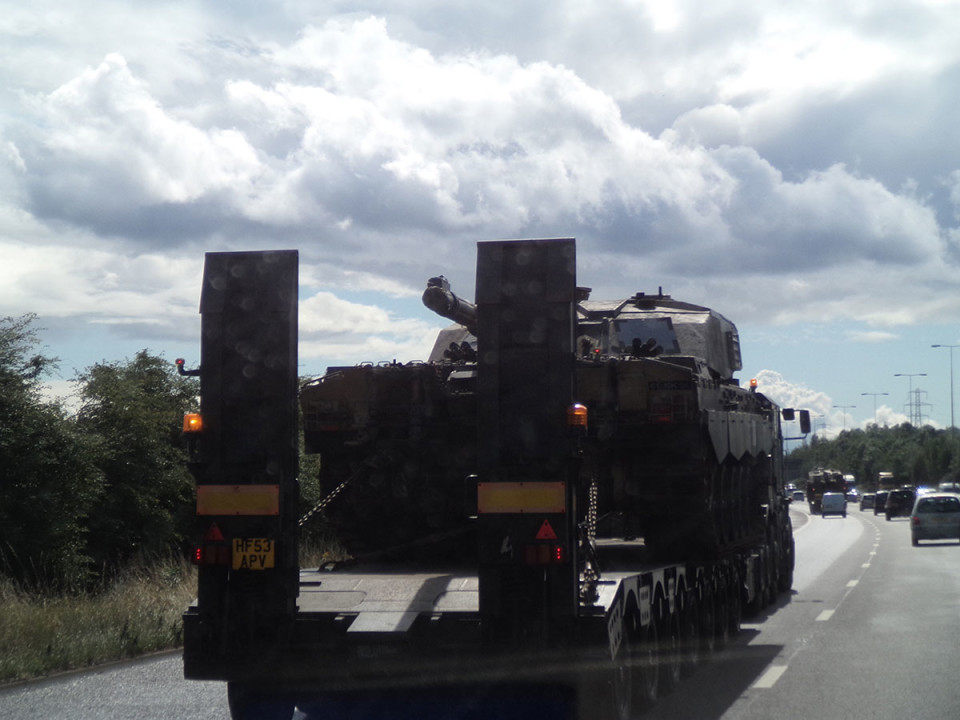 When I last posted a travel post back in August, we had just finished touring in Skye.  A lot has happened since then – we’re now sans-van and living in Wellington. We’re about to head off on another adventure down this way, so I thought I should at least fill in our final days in the UK!

After we left Skye we began pootling back down country to Somerset. There wasn’t a great deal we hadn’t seen in the area, and Kate has a keen interest in corrections (human and grammatical) – so we stopped off in Inveraray to visit the Inveraray jail. It was a bit shit. One of the few ‘attractions’ we actually paid for – we were sorry we did! Tired old mannequins lay about the place, I don’t know what I was expecting, but it wasn’t this. I guess it was more geared to children and idiots, an over-emphasis on spectacle that just ruined what could’ve been quite sombre and effective. The buildings are a gem, there’s a wee courtroom and pretty unpleasant cells – but save your money! At least we have this!

We had arranged to see Kate’s lovely Auntie for lunch at Loch Lomond. We had stayed with her in Tighnabruaich on our previous trip, and Loch Lomond was equidistant for both of us.

We arrived the evening before and were to meet at the Lomond Inn, which was coincidentally just down the hill from our wee one-lane freecamp spot on the way up. It was such a nice spot we elected to stay there again and dropped Dotty into first gear for one more hill climb.

Our morning was leisurely – we were just waiting until lunchtime to roll down the hill! But as 11am rolled around, the traffic increased on our wee road. We’d had one car all morning – now it was non-stop. All sorts of vehicles too – campers and bikers and people with canoes, families and hoons. It being a tiny one lane road I became a bit concerned about our ability to get down the hill – Dotty had spongey brakes, on long-slow downhills you’d eventually have to take your foot off to get more play before your foot hit the floor and she just picked up speed. A bit dodgy with oncoming traffic!

A cyclist laboured up and caught his breath in our wee park. As he gasped for air Kate hollered at him – ‘what’s going on?!’

Our hearts went out to the poor motorcyclist and his collision buddies – but our show had to go on. Plan B was to join the flow to go around the accident, and in convoy we rolled along and passed a quiet yet heavily fortified military complex (probably Trident or something) to the A814. This road was barely two lanes, and was getting clogged with larger vehicles like us making things difficult. As we snuck out it too was closed behind us – phew!

So we arrived in Tarbet to have lunch with Auntie. It was lovely to see her again. She’d even washed and returned my New Zealand tea towels which we’d left at hers last visit, and included some Scottish ones for good measure! We jumped on a Loch Lomond cruise and sailed around, and though it was very windy it was lovely. A fine send-off to Scotland, and a nice chance for a scenic catch up. The hotel making a booming trade

As we sailed along the shores we noticed the traffic north of Tarbet had stopped too – there had been another accident. So all three roads were closed – there was no way to get south of that point, aside from a six-car ferry in Dunoon. The wee Tarbet teashop would’ve made a killing – if the staff had been able to get there to open – as it was, a skeleton staff at the local Hotel were hard pressed to meet demand. The non-moving traffic, with another lucky motorhome

This was one of the times we were so glad to be in the campervan. We enjoyed a cup of tea, informing the small packs of people further back from town what was going on (or not). We decided not to bother to leave, checked with the pub if we could stay, had a couple of pints and spent the night in the car park.

The rest of the trip south was uneventful, aside from passing some tanks! They would be the only vehicles we could beat. Back in North Petherton we had to start taking care of all our loose ends in preparation for moving to New Zealand. We had to tidy up and sell Dotty. Sad days indeed! However I was ready for the next adventure and the stress of getting an MOT and selling her before we left countered my sentimentality in the end.

I listed her on Gumtree and there was a lot of interest. One guy committed to buying her over the phone, paid me a £250 deposit and all. Said he knew it was silly but he was keen as a bean. Sweet! He just needed it dropped off, in Hampshire. Three hours away. Pretty arse, but OK – one day of driving and we’d have that box ticked! So with Kate following in the family car we both drove down to Hampshire and met them in their home.

At lunchtime we gave them a tour. While I was doing the engine stuff with the husband, the wife remarked to Kate that they’d call her ‘the flying turd’. Our beloved Dotty! Tour over she returned to her house, and later the man did too to ‘see how my wife is doing’. He came out shortly after, made up some shit about rust (even though no problems had been mentioned in the mere days-old MOT) and declined to buy the van. You should’ve seen Kate’s face.

He was rather sheepish, but we were not in a forgiving mood. To his credit he gave us £100 for petrol, and we kept the £250 bond, so it was a costly experience for him not consulting his image-obsessed wife. After a quick bite at the shitty local pub where we interspersed silent rage with spewed vitriol, we jumped back in the drivers’ seats and drove the 3.5 hours back to North Petherton, van unsold and one day less up our sleeves. Dotty’d never done such miles!

Panicked now I dropped £1000 off our asking price, and the phone rang off the hook. We sold her to a guy who already had a smaller Talbot Express van and was looking to upgrade in size, not style. Unlike those Hampshire pricks, he was delighted with her. He marvelled at the clean, smooth running engine and enjoyed the old-car foibles as ‘just how they’re like’. He was lovely. So we were very happy to see her off to a good home, and he picked her up after we left for London so we were spared any emotional goodbyes.

Thanks Dotty – you were a life changing vehicle! May she have many happy adventures to come. Not the finest final photo, but it is. So long Dotty!

Back in Kate’s folks at North Petherton we set about helping prepare the house for rewiring and renovations. ‘Helping’ involved Kate inviting friends over and smashing the plaster off a room that wasn’t going to be replastered – I meekly protested to no avail.

I also mowed the lawn and sat about playing computer games a lot. It was just nice to not seek adventure for a time, to stay still and enjoy more stationary pursuits a while. It was also nice to hit Kate’s dad’s liquor cabinet.

One day a family friend was taking his dogs to a dog show, so we tagged along. We walked to the local canal and along it to the neighbouring town. Along the canal were pillboxes – set up in WWII to slow the Germans if they did manage to make landfall in the south – a reminder of the history!

The dog show was barking. It was a mixed affair with some real hotshots and some real dogs’ breakfasts. We had an absolute ball as dogs got in to position around tunnels, only to sprint off and take a dump when the moment came. I just loved the irrepressible spirit of some of these dogs – untameable. I love watching serious people engaged in niche sports. We also took a couple of day and night trips. We went over to Bristol to see Kate’s buds. I like Bristol, it’s a city I could stand to work in one day. We also shot over to Cardiff to see my old flatmate.

We finally got to visit Barrington Court – a National Trust property with such a lovely name to say in that pompous aristocratic tone. This was actually the first house the National Trust got on it’s books, just as a byproduct of being on the land really – and as such all furniture was sold and it’s now extremely spartan. Some great woodwork inside, and something something Wolf Hall – but we did think the space could be used as a gallery or something, like other empty NT houses. Great ivy on the windows One more of these

Eventually the time came to leave Somerset and head to London. We said our fond farewells to Kate’s family, barely had time to say goodbye to Dotty and jumped on the bus to the Capital.

Kate’s great old buds were hosting us again, and it was a bit like last time I left for home – sad to end the adventure, but looking forward to getting home. This time was different of course – Kate was coming with me! Yay!

Kate’s buds had a new housemate in their apartment – a ripe old-aged wee terrier called Flopsie or something. She was completely blind and deaf and barked a lot. As our friends said, ‘she’s a sweet wee thing – but she doesn’t give much back’.

One evening we caught up with my old Scottish flatty for dinner and enjoyed poking the bear regarding the recent Scottish referendum. It was great to see some of my buds on our way back – such important buds for me from my first trip!

We popped over to Hyde park and enjoyed one more squirrel: We went nuts over this squirrel

Our hosts had also taken advantage of having keen cook Kate in residence and organised a dinner party. So an Australian folk music duo, an accomplished music journalist and his partner and a touring Indian violin virtuoso joined us for dinner. Almost nobody had met anybody else before. The violinists got to jamming and it was wonderful to see the level of talent up close and personal (and both with such different influences) – a lot of fun, I was enriched. A real ‘London-sort-of-thing’. I hope our hosts can continue to do more of that, even without Kate in the kitchen!

So that was that, and now we’re back in Wellington, and I shan’t pollute this entry with that.