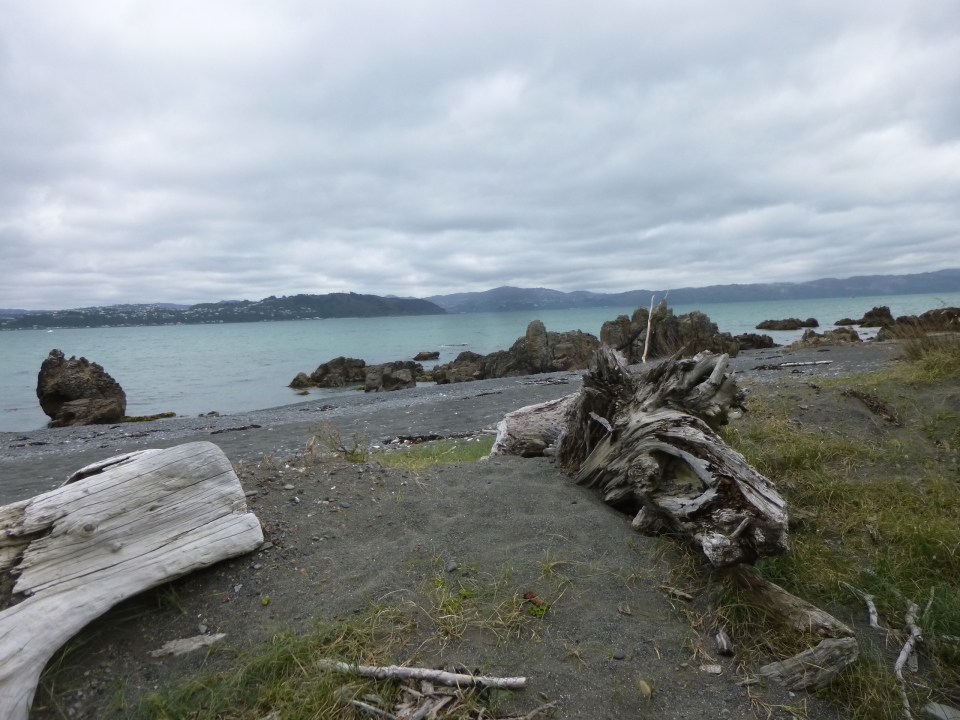 Later this evening 2014 will come to a close. A quick flick through the blog reminds me of the grand adventure I’ve had these past 12 months. What a year! I feel so blessed to have been able to do all I have done. But enough of that! Here’s some photos from my mini-adventures closer to home:

While I lived with Dave I went exploring walks out in the Hutt Valley. I walked down the Korokoro gorge, very quiet and peaceful with plenty of cute ducklings and derelict mill dams and things: View from the Mill workers’ track, connecting Petone to Korokoro The debris catcher at the bottom of the gorge

I had a wee evening on the beach at Petone, which was quite picturesque! Seagulls hanging out for a chip at Petone beach

I ventured further north in to Upper Hutt to visit the Birchville Dam. I had never been there before. A very easy 15 minute stroll through native bush to the dam, I extended it by walking up to Cannon Point trig station and looping down to the Hutt River Trail and back to the car. Worth an explore for any Wellingtonians who haven’t explored around Upper Hutt! The view up the valley from the trig Heading back down from the trig I walked along the Wellington fault line. This clearly shows the raised bit from the last huge quake in 1855. A reminder of the Wellington fault A bridge. In Upper Hutt.

I popped out to visit the Pencarrow lighthouse. This was New Zealand’s first lighthouse, lit on the 1st of January 1859. The route out follows along the bays and beaches from Eastbourne. It is not a loop track and follows a well-kept gravel road good enough for standard buses to traverse (which they did, full of American cruise-ship tourists). As such it’s very exposed, very boring and I wouldn’t recommend doing it on foot. On a bike, with a southerly to blow you home again, that’d be the way to go. You’re feeling away from it all, until the coach. Bit of wildlife was to be found And a bit of surf.

As I walked up to visit the lighthouse, I heard a plane – and looking up, there was Dave doing his rating test in the Nang chang. I waved and all that, looking like a dick – all to no avail. Pencarrow Lighthouse and I The old and new lighthouses from Bluff Point lookout looking the other way from the point

I pottered further around to some lakes. There were plenty of frogs ribbetting away which was fun, and loads of birdlife – so that was nice, it’s just such a mission to get out there! You have to ask yourself if you can be shagged

Just before the furthest carpark to get to Pencarrow, one of the Wahine masts stands as a memorial and reminder of the 1968 Wahine disaster. You carry that knowledge of those poor folks along the track and there’s little to distract the mind! Finally, a couple from around town. I like to walk at lunchtime and our fine capital has been looking pretty tidy recently! Civic Square and my work behind! Anti-whaling protestors heading back out to fight the good fight

So that’s been the last month or so. Recently I have moved back home and have been returning it to its former glory – amazing what tenants don’t do to look after a property! Bet they started thinking the place was a real dump too, when a little TLC has brought the place out of ruin. It’s been nice investing in a location, not being on the move – doing some gardening and whatnot.

It is only a few months now until Kate joins me here and we have some grander adventures. Speaking of which, I found these photos on the camera from our last days in London – aw! What’s with that dude?