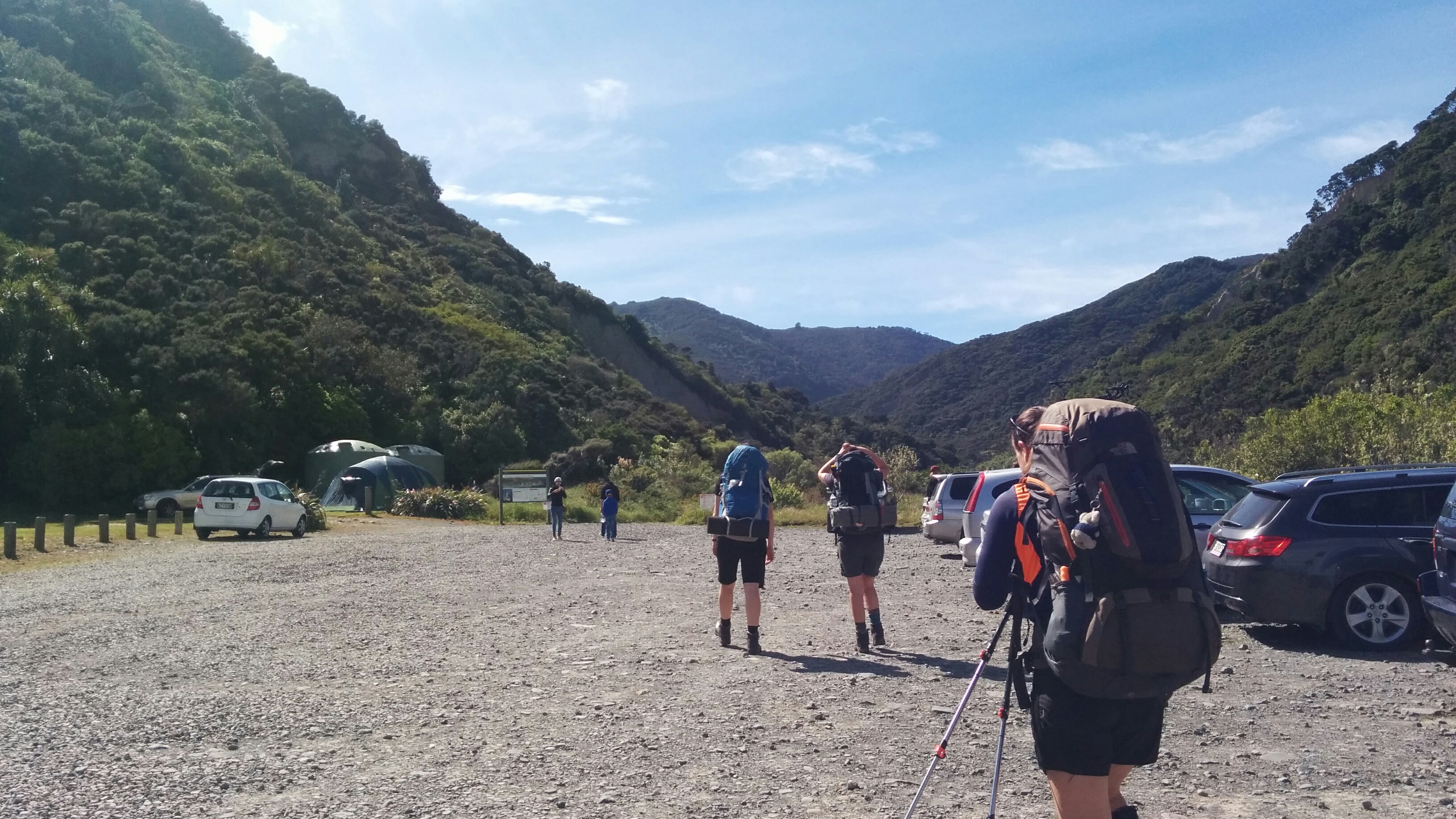 Aorangi Forest Park sits at the southern-most tip of the North Island. It’s a steep area of forest, more popular with hunters than trampers. Given the weather this long weekend, it was suggested this might be the spot. The boffins got together, organised two groups of four and a route with a car swap, and we were off on a two night tramp at Aorangi.

I gather my gear and find sufficient food without leaving the house – porridge, crackers and tuna, museli bars and peanuts. Soon the others of our party arrive – Sarah, H and K. We load up the Tardis-like Jazz and head over the Rimutakas to Wairarapa, then south to the Putangirua Pinnacles.

I recall, as we arrive, that the water there is a bit terrible. So it is with already dry mouths that we don our packs and sunscreen and head up to the Pinnacles.

From the viewpoint, they seem as phallic as before.

We climb the ridge behind them, a 4×4 track with at least a little use. In a few hours we stop for lunch at a camping spot at the summit (470); some hunters have hung branches for tarps and wood for a fire pit. Tui and riflemen investigate our presence in the Manuka forest.

The sun is hot and the air dry; we sweat away what water we have. I look at moss and wonder if I should start sucking on it, and thinking about the bottle of beer Sarah’s got in her pack – I may have cut things a bit close on the hydration front.

We carry on, climbing to 590 before dropping down sharply to Washpool Hut (1968, 250m). The descent is brutal; I make liberal use of my tramping pole. I want to see if it’s early use helps with my knee pain, so my descents are slow but with much less weight on the knees.

Washpool Hut is in a small clearing, crowed by ferns on one side and a delicate leafed bush on the other. I learn this is Onga Onga, the New Zealand native Stinging Nettle. And sting it does, with an initial roar, then days of intermittent numbness and tingling. One learns quickly to pay more attention to the track when Onga Onga is about!

When Sarah was last here in 2011 it was drippingly damp and mouldy. We are chuffed to find it clean, patched and lovely – we decide not to push on and stop here for the night.

It’s an old Forestry Service Hut, and has the small steel bunks common to the type. Maybe they were tighter in their youth, but now it is like a wacky shack up top – I get a top bunk and spend the night riding earthquakes or worrying about causing quakes of my own.

It is not all that handy to a water source, but some thoughtful soul has left a large water bottle. We fill it at the stream, 50 metres or so away.

Before we retire, H rehydrates some mashed potato and whips up a fish pie with veges and sauce; it is delicious.

The DOC Hut Visitor Books are intended to help identify hut usage and any problems on nearby tracks. Some hunters use it to note game-sign. Others, only when they lose their hunting dogs. Another vocal minority use it to write long, whingey passages about anything and everything. We enjoy a glimpse into some deranged psyches, in a barely used hut-book which goes back 10 years. I find an entry from an old friend of mine some years back, his familiar scrawl a nice surprise.

As a group we work through the paper’s crossword. It’s a torturous effort but we make it through. Checking the answers we find they’re all wrong; it’s the answers to last weeks crossword. Why! So H comes up with questions for each of these new answers; it is a game that takes us to bed time.

Another tramping group catches up with us, all young and trendy. There are 10 of them, but fortunately have tents and opt to camp down by the stream, leaving us to our fusty old early-bedtime ways.

I rise first and get a pot of water boiling. H is chuffed to have another early riser, and we move relatively quickly, leaving the hut at 8.20. Wishing our tent-based tramp buddies a good walk we cross the stream and head straight up the opposite bank, 500metres.

The track is clear and we miss it only briefly, heading to a 765 summit by accident before back-tracking to head down the next valley.

Sarah and H disappear ahead of K and I, poled and slow, as we descent steeply. We drop down to the grassy clearing holding the bright orange Pararaki Hut (200metres). A little mouldier than Washpool, we aren’t staying – but we do stop for a snack.

Members of the party behind us begin to dribble in, and shout a ‘Cooeeee!’ on their approach. As we depart to cross paths with our car-swap group, we hear cooeee’s from all directions; they’ve caught us too. So in the middle of Aorangi forest, 18 people of 3 separate groups randomly converge for lunch.

We exchange keys and are on our way, fuller than we might like. I realise every stream-based reprieve is accompanied by an almost immediate vertical climb as we regain our height away from the stream canyons.

K demonstrates an amazing ability honed from her doing the Te Araroa some months back; an ability to produce a constant supply of fresh fruit and vegetables from her pack. They are without limit, she is gracious and generous and we all enjoy them.

We pass a random fence; it’s a forest rejuvenation experiment run by a Forestry Service long-since expired. A patch of forest was fenced off to see how the native bush recovered when deer were unable to graze. I think of these old environmentalists, with an experiment still running though they are most likely not.

We climb a 400metre saddle then drop to a small ridge between two stream tributaries. The roar of water surrounds us unseen, and we are surrounded on all sides by mountains covered in untamed bush. It is a magic spot.

We drop down to 100m and the Otakaka streambed. With remnants of farming earthwork amongst the rejuvenating bush, it is quick work heading down stream and we shortly arrive at Kawakawa hut, at the fork of two streams.

Two guys are there; one with a swollen ankle. They look to be sticking around, move stuff for us, then shortly depart.

The hut has a small meat locker. Inside is one white, rancid looking thing hanging on a hook. It smells of death. It is a head, we think; H brushes it onto a shovel and deposits it in the bush. The putrid smell of rot dissipates.

We lie in the sun, drinking tea. K produces a bag of chips from her miracle bag, and all is well in the world.

As the evening wears on we worry for the bigger group; we have heard nothing. Eventually three arrive; one damaged a knee badly and took five hours getting to Pararaki. Left with a PLB from our other group and surrounded with six healthy trampers we are confident of their safety – but reminded how things can go south in the bush.

We hear distant gunshots at dusk, then notice a slither of farmland and sheep, distant on a mountain top. Rabbit shooting we suspect; it is jarring to one moment feel so remote, then see sheep grazing the next and realise you’re near farmland.

The bunks are all tied together, and creak and groan as one. The combined culpability eases my anxiety, and I have a poor but relatively OK sleep.

A fantail farewells us as we pack and leave Kawakawa Hut.

After coffee and porridge we depart across river flats, following a tributary of Otakaha stream before crossing a small saddle and then follow Mangatoetoe Stream out to Mangatoetoe hut.

Sarah shows me how to eat the growing tips of supplejack, a strong native creeper vine. It tastes like a bitter pea pod.

We drop our packs and feel like we’re walking on air. We cross the river and check out a deserted wee hut; destroyed by drunk dickheads spending a night in the nearby Mangatoetoe hut we presume.

Mangatoetoe is a lovely spot.

With only an hour to go we devour some snacks and carry on to have lunch at the road end. It is a quick push along the river banks to arrive to the Jazz. We tuck between cars to have a quick lunch, then drive out to Ngawi for some well earned post-tramp snacks and the long ride home.