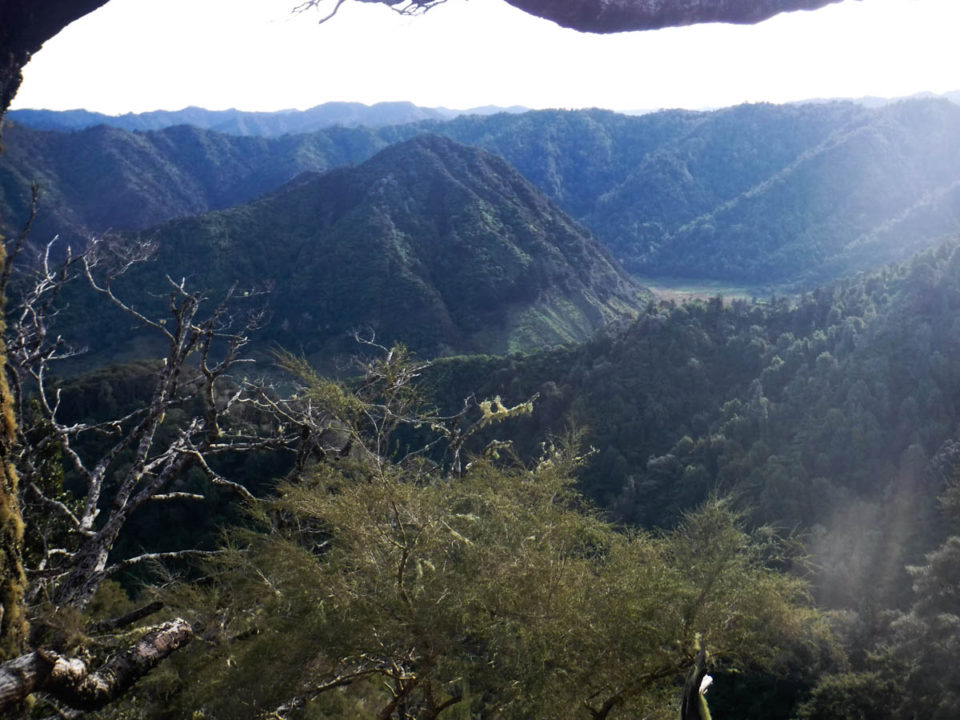 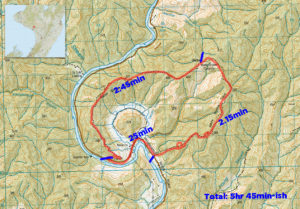 The Atene Skyline Track is a 6-8hr loop track on eastern side of the Whanganui river, about 45 minutes north of Whanganui. It catches my eye as a day trip while returning from walking the Pouakai Circuit.

Leaving a cabin bright and early, I drive 45 minutes to the start of the walk. The road itself is worth the trip, winding alongside the great river. The soft clay claggy goo that passes for earth here makes keeping the one-lane, windy road passable a considerable and eternal effort – an effort made for the timber industry.

The Atene (Athens) settlement houses a fine Marae and a historic Pa upon the picturesque peak. It rises to 276 metres, surrounded by a bowl-shaped depression before rising again. In ages past this was the bed of the Whanganui river, but over time the river cut through the loop and redirected past. Now sheep graze on the former river flat. It’s quite clear on the topo map – an interesting feature!

The main carpark is the 2nd sign for the track if heading in from the south – you walk the route clockwise (though it doesn’t really matter). I hit the track at 9am, just taking a day pack this time.

The first few minutes are tidy, with boardwalk through rainforest-esque palms and vine, before it reaches farmland and turns to shit. Sharing tracks with cattle in winter is the pits – they’re heavy bruisers and turn the land to mush. I’m glad I put the gaiters on. 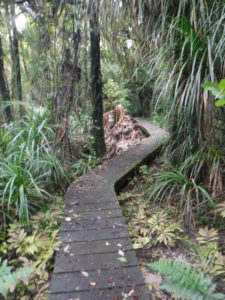 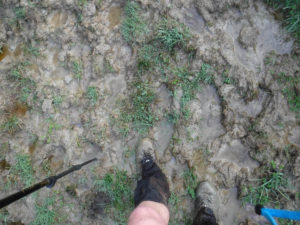 There’s early morning fog, and it lifts ever so slowly. I suspect I might see nothing all day, but push on regardless; being in the mountain mist is a treat itself. 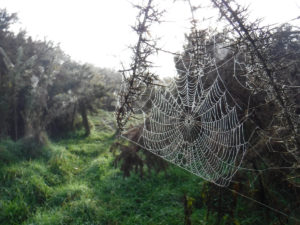 Dewy webs in the farmland mist

There’s a surprisingly tidy toilet 20 minutes up track, where it meets an old roadway. A signboard informs the track is from 1960s surveying of the bend, when serious effort and consideration was put in to making an earth dam and hydro scheme out of this unique land feature. I wish there were more information on this – grand engineering schemes are fascinating, even if it’s just the concepts!

The road must have been a hideous gash on the landscape 60 years ago, but now it has healed nicely. Today, aside from early moments of cattle-crushed sludge which are probably OK in summer, the track would be fine for a mountain baby buggy, bike or an oldie, all the way up to 1.5hrs in when the route deviates from the road. A pity the farming land owners at the base don’t allow access from the roadside to this graded slope, else it’d be a unique accessible forest landscape for many more, but what more does one expect from farmers? NIMBPaddock wankers.

So I toddle along the 1.5hrs of road. It’s all mist, there’s naught to see but enjoy the walk. 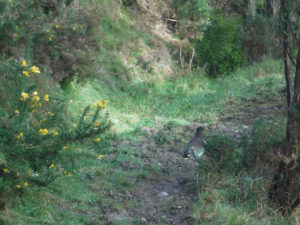 Kereru surprised to see me on-track 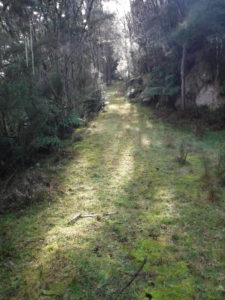 Beyond farmland, the track becomes beautiful 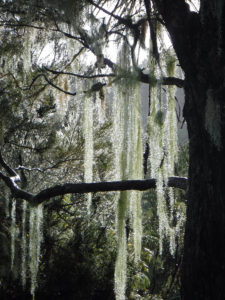 The mist is not an oddity around here 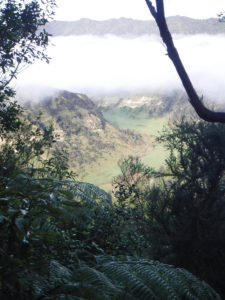 A view down to the bowl

There’s plenty of game sign on the track – I’m not sure if it’s all the same deer/goat (can’t tell the difference yet) or cow, but I make a bit of a racket around the bends. There’s the odd mighty hoof in there too, so I worry about how to tackle a bull on the road. I figure I’ll scurry into the bushes on either side. When the steaming stink wafts to me on a bend, the situation presents itself – but I needn’t have worried. It’s a wee calf. It reacts to me like some first dates, shitting itself and tearing off down the bank with a crash.

If it were a startled bull I would not have been safe, they bushbash considerably quicker than I. 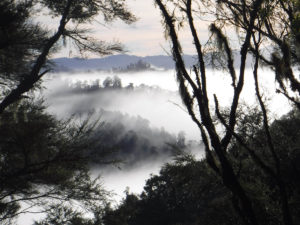 The Ahuahu Valley views from the road.

At 1.5hrs the surveyors went left, but the track veers right – we’re now on typical tramping trail, markers and all. What is untypical is the volume of game – there’re fresh prints everywhere, and poo. Piles of leaves show where Possums have fed too – it’s a mammalian meat market up here. The first I meet is a mutual fright – I catch a glimpse of a butt 1.5metres ahead disappearing down the ridge, so close I feel the hooves pounding the earth through my boots. I fancy it as a deer but it was probably a goat – I meet and startle about 5-6 others without being stealthy at all, toddling along. 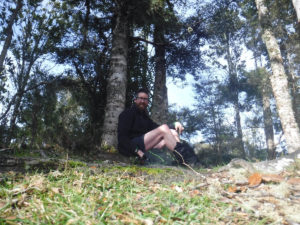 I startle another 2 goats – one disappears, the other just wanders down the track 10 metres. It looks back to me, as if to say – ‘do I really have to go off track?’ Yes is the answer, as I catch a quick photo before he drops down the ridge. 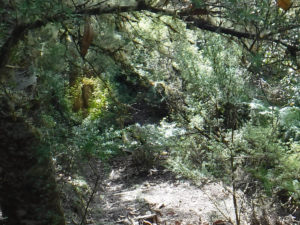 After 2hrs 45min I reach a wee DOC campsite. It’s got everything you need – a shelter, rain water from the roof, sink and tap, a table and a toilet. Someone has piled wood to dry under the shelter too. I grab a bite to eat then abuse the facilities. Quietly sitting, I hear another goat coming closer, tearing leaves of fern as it comes. They really are just everywhere up here.

I had an idea of camping here on my trip, but decided not to. I am glad I didn’t – alone up here, I would have shat myself silly with all these goats crashing about. 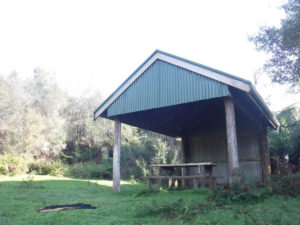 The track continues on. It’s good track by and large – clear enough, but not thrashed – quite enjoyable. Stairs probably of an 80s vintage tackle some of the clay moments of difficulty. I wander from peak to peak, working around. At one point I am treated with beautiful views of Ruapehu – incredible! 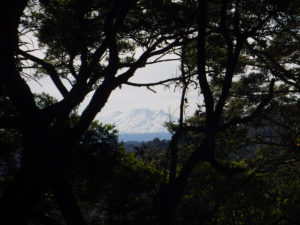 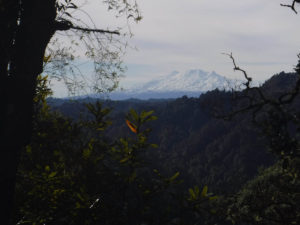 I pass signposted peaks, and get fog-less views of the Atene Peak on my way down. Moments on this side are somewhat disconcerting – some of the cliffs are massive and you walk right on the edge. 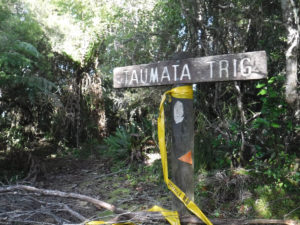 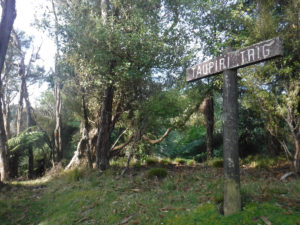 From Taupiri Trig I drop, fairly fast. There are steps here and there, but with the soft clay mud, at times it is a slippery business. But soon enough I am starling cows again and crossing a 20 metre patch of farmland, back to the road. 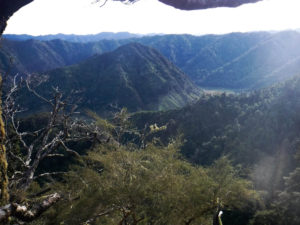 Reaching the road at 2:15 (5hr 15min) I wander the two kilometres along the road back to the car. 3 cars pass in the 25 minutes, and a flock of geese battle on the river bend.

Filthy dreadlocked backpackers loiter at the carpark. I flash my butt getting changed, then drive on home to Wellington, just in time for rush hour.

I really got some writing mileage out of this walk – but it really was a surprise doozy which I enjoyed very much. If you’ve got the spare time about Whanganui, give it a hoon.

P.s. if you’re a cheapass accomodation guy like me, the Castlecliff campsite is much better situated for this. They didn’t pick up their phone so I stayed at the Top 10, which is 15 minutes out of Whanganui on the other side of the river. The cabin was nicely situated by the river, but it was annoying to drive back to town, over the bridge, then see the cabin on the other side of the river 30 minutes driving later!