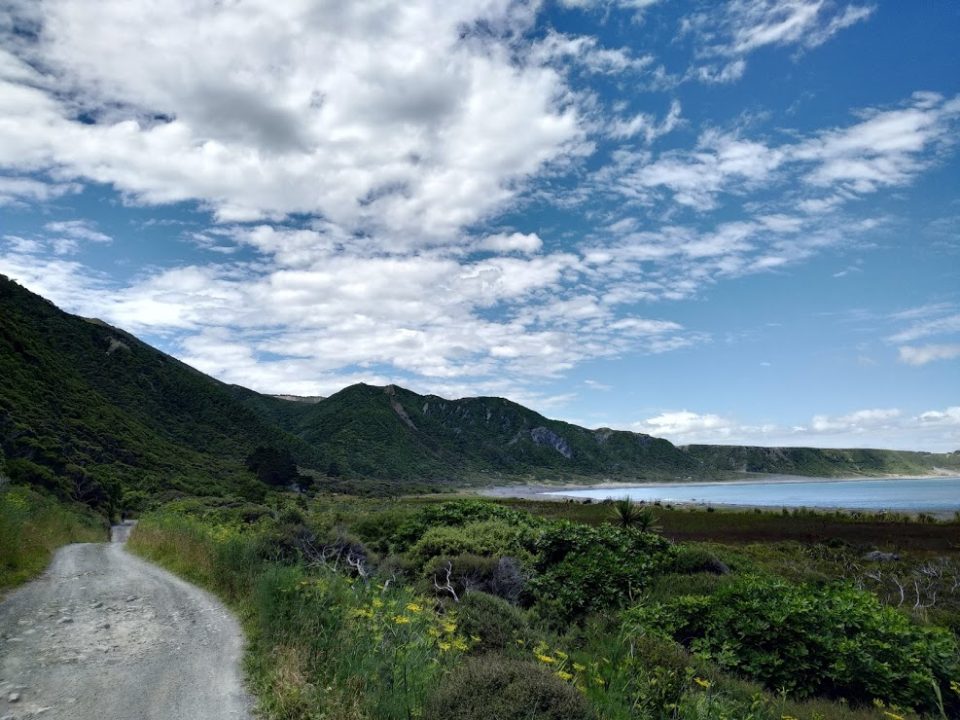 The Remutaka Cycle Trail is the obvious choice for a proper bike excursion before I set off, collecting many of my training routes into one large 115km loop. Brother Dave and I set off from Mums.

Dave arrives via a mountainbike route over the Western hills. His bike is built for mountains, with the front and rear suspension requiring some ingenuity to mount his gear to. With one large drybag perched on his rear forks he’s able to carry the same volume of stuff as I, and we both travel with full kits perfectly suitable to solo travel.

Dropping off the hill, we head north from Melling along the familiar Hutt River trail. Crossing at bridges, the route is an easy wind along the riversides suitable for all. Wobbly children and/or curious dogs are our only obstacles. 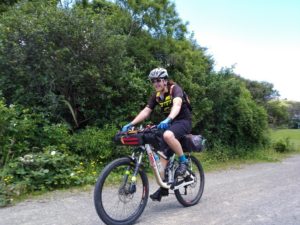 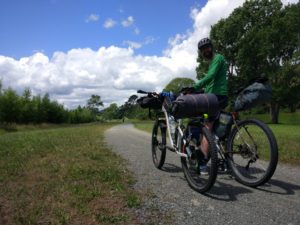 bros! on the Hutt river

North of Upper Hutt, just beyond where I have travelled on return training rides, we pass a dairy. Dave slows – ‘they sell ice cream there’. Dave is not a destination man, he excels at at enjoying a journey.

Ice cream bought, we stuff the cones alongside our handlebar bags to find a nicer spot to eat them. Hitting a curb, Dave’s cone bounces out and crashes onto the pavement. It’s a sad sight, but even the sidewalk can’t beat a trumpet – it tastes fine overlooking the river’s headwaters. 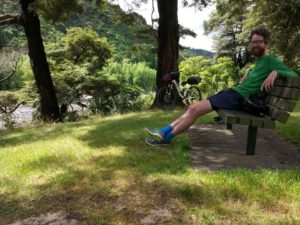 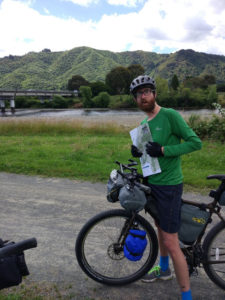 From here, the trail gets way more interesting. The single track weaves through forest and bounces along roadsides, a 20cm wide gravel snake hiding amongst the weeds. It’s great fun blatting along the gentle curves, my wee bell dinging with the brush bumping my bars.

At Te Marua dairy we stock up on more snacks – this biking lark is alright! Riding on, we come across a great steep hill. ‘We don’t go up there do we?’ I ask Dave.

‘The sign says yes’ he replies – we drop into granny gear and drag-ass up the hill. It’s a climb out of nowhere, I feel the ‘rail trail’ is lost in this moment. Hideously steep climbs see us dismount, huffing and puffing. But soon we reach a gravel turnoff which looks a lot like a rail trail. As we continue north we know we’ve missed a tunnel here somewhere; there’s more rail trail to discover another time, we’ve cut a corner today.

Nevermind – we reach the old SH2 and blast down the old main drag, connecting up with the Rimutaka Incline trail. I’ve written on the Rimutaka Incline before so I’ll spare myself, but it’s a nice ride to do with Dave again. In the summit tunnel we stop to investigate the geocache. 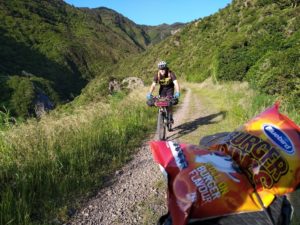 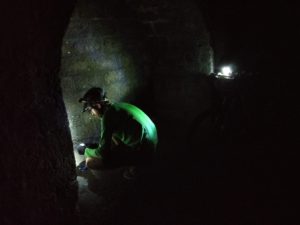 52km along, we roll in to Cross Creek for our evening’s camp and spot a man silhouetted against the sky. He’s in the dragon stance and ignores Dave’s greeting. It turns out the guy’s a real stickler for the rules of charades. They’re a cycling couple on their final night of riding the opposite direction. ‘Popped by Featherston to grab a half-doz beers’ he skites, before rattling off how much he likes Dave’s bike (he has the same, but better). I can’t put my finger why, but I feel the guy is probably a twat.

We cycle by the little Cross Creek shelter. They’ve filled it with bikes and their exploded gear, and make no move to clear space, despite there now being three separate parties at the site. The difference between my needless shelter consideration on my last overnighter and their complete ‘here first’ absence of any riles me a bit, but that’s on me. We ride further down, pitching by the ruins of a small concrete switchbox. 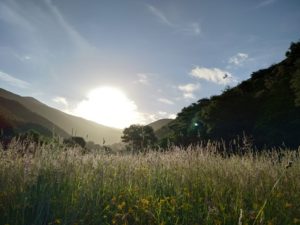 The night is clear, dead-calm and stunning. Dave and I have a late but beautiful evening, soaking up the heat stored in the concrete walls long after the sun goes down over cups of freshly picked Kawakawa tea.

At 3am I am startled awake; there’s a great howling gust. I hear a rustle and know Dave is awake too – we both get out to tighten our guy ropes (and empty our own). The gust was so strong it pulled some of Dave’s pegs; he has a hard night of it, waiting for the next gust to blow the tent down on him in a shower of condensation.

It’s a howling wind in the morning, sweeping through the old railyard. There is barely a tree for shelter; we make use of our wee concrete bunker. Dave’s tent collapses in gusts which throw gear down the yard, whip coffee from mugs and blow everything down or over, even if it’s pinned down. It’s a real pain in the ass. 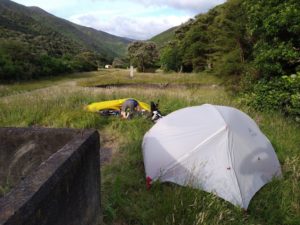 “Look at those selfish gits making use of the shelter” I complain while holding down my white-capped porridge. Dave is a voice of reason,

“I thought he was OK” he replies, through a mouth full of hair. Eventually we away, and see the bloke’s left six empty beer bottles and a chunk of half-eaten bread outside the shelter. I feel vindicated – he was a twat, my gut knew it!

The gusts follow us out of Cross Creek, and down to the road. Coming from behind it makes uphill downhill, but it doesn’t stay behind for long.

We head south along Lake Wairarapa. From the start I am white-knuckled, leaning the bike into the cross-wind, fighting friction enough to be in the granny gears just to move on the flat. Dave’s a bit more used to it, a steady bike-commuter, trusting the bike to right itself. I don’t trust yet and I work my ass off, stressfully, fruitlessly. It’s a long 35km to the coast. 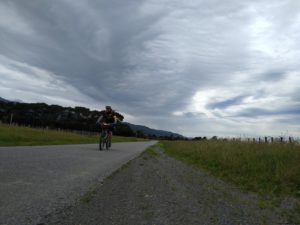 We pull into a little rest stop. There’s a wave from a van – a tattooed old bloke with a beard, a sad santa after two decades’ chainsmoking. He’s living it up, a hypocritical life of benefit bludgery while decrying others. We listen while he shares tinfoil hat theories and racist rantings. Oil being the natural lubricant of plate tectonics is quite up there. Interesting to listen to, but he eventually touches on points dear to Dave and I and we leave him to his idyllic yet depressing circumstance. ‘I’m an old bloke, if I didn’t have something to whinge about what would I have?’ he farewells.

There’s a little fun single-track before we’re back on the road in the wind. Curious cows frolic alongside.

At the beachfront separating Lake Ferry from the ocean a weirdo has tied teddy bears to a fence. It’s some creepy shit. 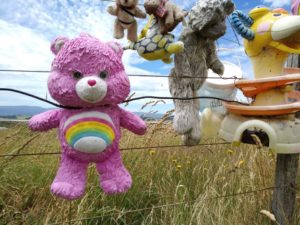 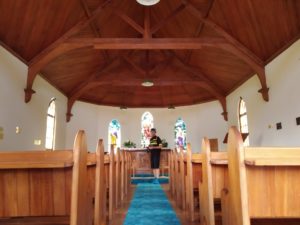 Church we popped in to. Memorial to the Matthews’ family ancestors, who’ve farmed this area since the 1800s

We climb a small cliff, then drop down to Ocean Beach. Ramshackle baches nest beneath the exposed crumbling cliffs. It’s stereotype NZ beach stuff not quite gone, with rusting workhorse utes rattling alongside the gleaming city Rangers on their once-a-year outings. 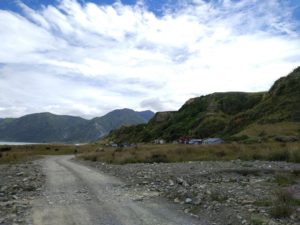 We cross streams and on to DOCs Corner Creek campsite. Finding shelter from the wind and sun, we take a long lunch, eating like horses. The effort of biking is strange to me. You work hard but it’s not as obvious as walking. Your joints don’t scream, the drench of sweat doesn’t stick in the wind. But you still hunger – we feast.

It’s only 2pm, so we decide to push on and shorten our day tomorrow. Corner Creek has a bit of a funny vibe. We’ll ride the coast and find a spot to camp on the Orongorongo river. 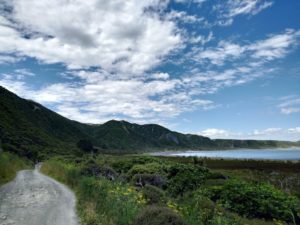 Starting the Wild Coast track, looking back to Ocean Beach

There’s a Remutaka Cycle Trail sign – ’16km, 3-5hrs’ it says. Is that walking or biking? It’s hard to tell. Biking or walking it doesn’t matter, it takes us three hours anyway – it’s a hard trail. Dave tells me my nephew called this ‘the ride from hell’ which cheers me up some – I was quietly thinking I must be useless, finding it such a hard ride. The road alternates between loose rock and sand, packed only by the wheels of 4x4s and ripped up by trail bikes, it’s barely there at times. Where valleys carve the cliffs, winds strong enough to knock you down whip out to the ocean. Time and again I grind up gravel at 4km per hour and get blown from the trail into the loose sands. Starting again, I get blown off before I can even cycle a rotation. Over and over, it elicits the first of many shouted expletives – this has turned from enjoyment to endurance. 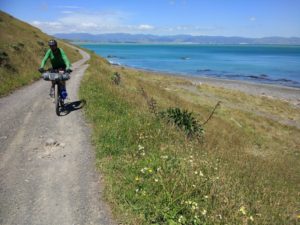 harder work than it looks! 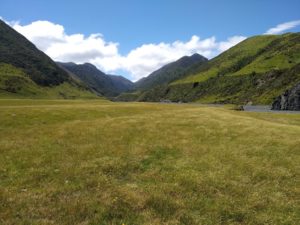 The Muka Muka stream (leads to Mt Matthews in the north)

We break often to enjoy the views – and in the seconds of still moments it is stunningly beautiful. But seven hours of relentless winds are sapping our will. It’s a maddening thing, pushing at you, knocking you on edge, every second of the ride. I fall into self-pity, I’m a black cloud. Dave is our positive force, putting a grin on, sympathising yet not fuelling my growing despondence. We churn on, around this coast aptly named ‘The Wild Coast Track’.

We climb great shingle fans, and slide down their opposing sides. ‘Just make sure you aren’t hard on your front brake’ Dave advises; I forget which is which and use both. My confidence erodes, and I find I can’t ride bits I know I can. I rage at myself. At one point, walking the bike down a gravel curve I lash out, rage-squeezing my brake levers. The bike bucks in my hands, the rear swinging up and clobbering me in the calf. Deserved, dumb stuff starts to happen.

At one of the few quiet spots we find Barneys Whare, an old shepherds cottage of the Orongorongo station. Way back before the railroad and road, sheep were brought to Wellington via this coastal route. At points the shepherds had to actually carry the sheep over the rocks during low-tide – what a job! The cottage was a DOC hut for a time, much loved by the surfing fraternity. Unfortunately repeated vandalism from 4×4 scumbags ensured its demise and it is now a private hut, with steel plate fortifications fit to withstand a coastal invasion. 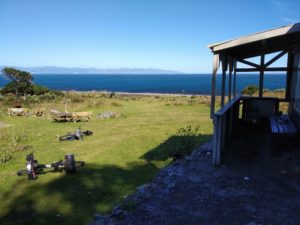 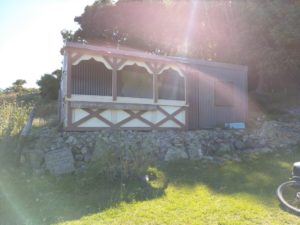 “I’m feeling like calling the cavalry” I tell Dave – after 7 hours of battling the wind, I’m spent. Our plan for the evening involves an unknown exploration up from the Orongorongo rivermouth, desperate to find a windless spot to camp. I am not hopeful, and the forecast for tomorrow is a 40km northerly to look forward to. Worse of this hideous wind, on tracks we’ve both already ridden.

At Orongorongo station we ring mum, and she drives out to get us from the Wainuiomata Coast. 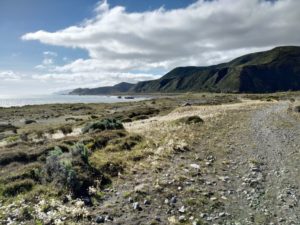 Close to the Orongorongo River mouth

As we wait, lying in the grass beneath Baring Head, eight hours of his hard riding under our belts, the wind starts to die down for the night. It’s a cruel tease.

I had hoped this ride would grow my confidence for my tour, but it just erodes it. This was beautiful but hideous, today was hell. Any misconceptions I had about the relative ease of cycling are blown to pieces – how will I deal with days of this in howling gales and lashing rain? 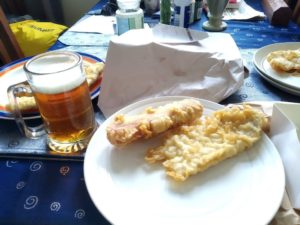 A great end to the cut-short trip.