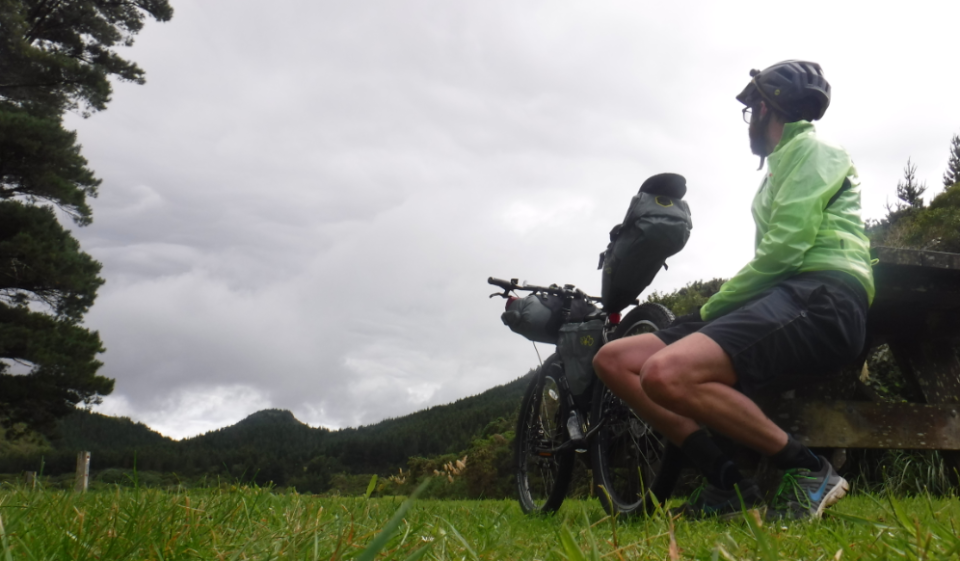 The bags I bought for my bikepacking tour of NZ arrive and I am mad-keen to trial them on an overnight bike ride. With inclement weather and the chance of problems I opt for something light; the Rimutaka Incline. 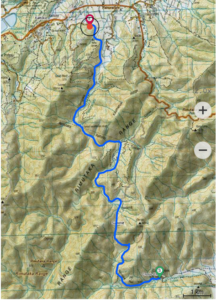 For my tour I have opted for a set of bikepacking bags from Apidura. With my XL frame I can get the max volume from the four bags. Altogether their volume is roughly the same as my tramping pack.

Together they weigh 1.2kg which is lighter than my pack (2kg) and I suspect lighter than pannier bags and their required brackets. But the primary seduction for these over panniers is that the bike is still capable of 100% mountainbiking at the drop of a hat.

All my Te Araroa gear goes on the bike, except for my heavy tramping jacket, gaiters and hiking poles. I am ready to hit the trail. 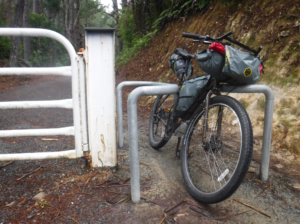 Another benefit; they fit through bike gates.

The Rimutaka Incline follows the path of the old Fell railway system which ended use in 1955. On the hutt side, the route follows a steady 1:40 gradient climb to the summit. Here a small township used to sit, where the regular steam engines were changed for fell engines. Fells had cogs to run on a central rail, which allowed them to drag up much steeper inclines – the summit to the Wairarapa drops/climbs at 1:15 gradient. It was a celebrated feat of engineering in the 1870s; as well as the trains themselves, the winding 19km route required multiple bridges, tunnels and significant earthworks. Made redundant after the main tunnel opened in the 50s, the townships disappeared and parts of the route were left to wash and crumble away.

The ride was opened to cyclists in 1987; I remember finding heavy rusting railway pins when I was a sprog.

I strap the various bags to the frame (took 7minutes; that’s the downer for bags!) and head off on the route. 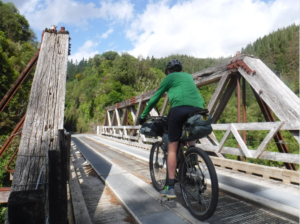 When a 10 second timer is just enough

It takes about an hour to toddle up to the summit. I can feel the bike is heavier than if it wasn’t laden, but it’s still pretty spritely – I have walked the route on foot and it is a different beast entirely!

Up the top, amongst rusting engines and township relics, there’s a tired runner. We’re surprised to see one another; it’s Monday afternoon and the forecast is shit. 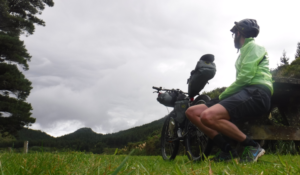 From here is the drop. I roar through the tunnels, winding down the other side – I could have cooked eggs on the screaming disc brakes. 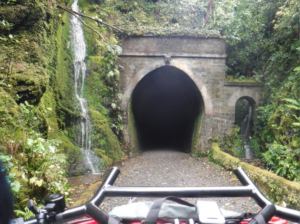 It’s a much less manicured experience on the Wairarapa side; the jagged rocks rattle my bones. I reach the base of the incline and the former Cross Creek station/junction in about 40 minutes maybe, startling a few goats at a tunnel entrance.

Biking is so damn quick, I am not done. I follow the trail to the roadend, which is a sampling of ‘proper’ mountainbiking – ups-and-downs, thin bridges, mud, stones, trees and dropoffs. I’m not hugely confident but it’s a wee ball; I don’t notice the bike bags really effecting my enjoyment. I have to have the gears lower to do the hard climbs, but handling – no worries to my untrained eyes.

Back at Cross Creek again, there are storm clouds moving in so I decide to set up camp. But it’s an old railway siding, the trees for shelter are few and far between; I decide tenting in the little shelter might be a goer. 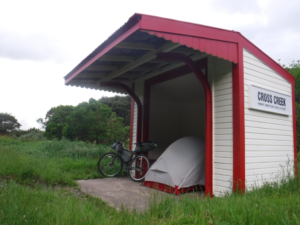 As I begin my dinner, I notice a smell of piss – it isn’t mine. It’s the swallow nest above me, from which two little heads peep down on me. They’re in a human place, but I am disrupting them; and I am also being a real hog of the shelter if anyone else comes. I know noone will, but I move the tent out into the wind and rain anyway, cursing my politeness to people who aren’t even there. 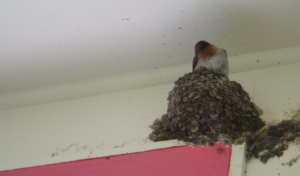 As the dusk settles, it’s so nice to be out having an adventure again, albeit a baby one. I have a great night of old and new, enjoying the tenting setup with the wee differences of bringing it with the bike.

The morning sees sporadic rain and heavy gusts; I pack the bags and move them over to the shelter to re-load the bike in the dry. I do my first wee bits of bike-maintenance – there’s cabbage tree leaves wound on axles and various rubs to fix.

I realise I haven’t got toilet paper or coffee; what kind of amateur overnighter is this?!

Breakfast eaten, I watch the trees across the way. I hear a great gust coming, and am keen to see how the tent reacts from the outside; I’d been watching it bend from inside.

The gust sweeps through, and the tent doesn’t compress as expected; instead it uproots itself and spins away down the old siding like a great tumbleweed. I leap up in horror – but once I realise it isn’t going to escape the turf, I laugh watching it spin away, bouncing along, into the trees 100 metres away. I knew those pegs were hopeless and I did a hopeless job on them, but with no gear in the tent it really just went for it. I had pitched knowing it would get the full blasts but curious how it’d handle it – now I know!

I retrieve the still-perfectly-up tent from the trees, squelching through mud to get to it. A wet foot and lost pegs are a small price for the amusement; I hope my memory of watching my precious tent just pull out and bounce away never leaves me. 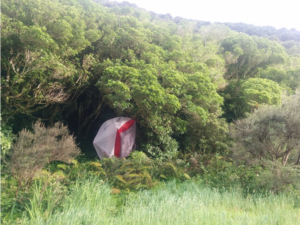 I didn’t pitch it there!

Today I need to bike the 1:15 climb; I am curious how it’ll go. I got my northerlys and southerlys mixed up, and am battling into these gusty winds too – it’s a bit more work, in my third or so lowest(highest?) gears, chugging on up at about 6km/h. At one point a strong headwind hits me, I slow and must stop. The wind can be crazy up here; once back in the day the train carriages actually got blown off the tracks and hung suspended from the train, given the train was ‘cogged on’!

The whole crossing takes 1:30hrs today – whipped on through.

I have ridden this route many times and wasn’t really out to ‘enjoy the scenery’ given the weather, but it’s a sampling of how fast biking can be. How many sweet moments did I miss which I could have noticed had I been on foot? Plenty I am sure. But my ankle is still behaving itself, which is the big thing.

I am left with a few little things to tweak on the setup, but by-and-large, luggage-wise I think we’re ready to roll. A successful little test, another little moment to add to my mounting optimism for the outcome of the bike plan.

I’ll continue to learn, ride, practice and gain more technical skill before I head off – and find those spare pegs!