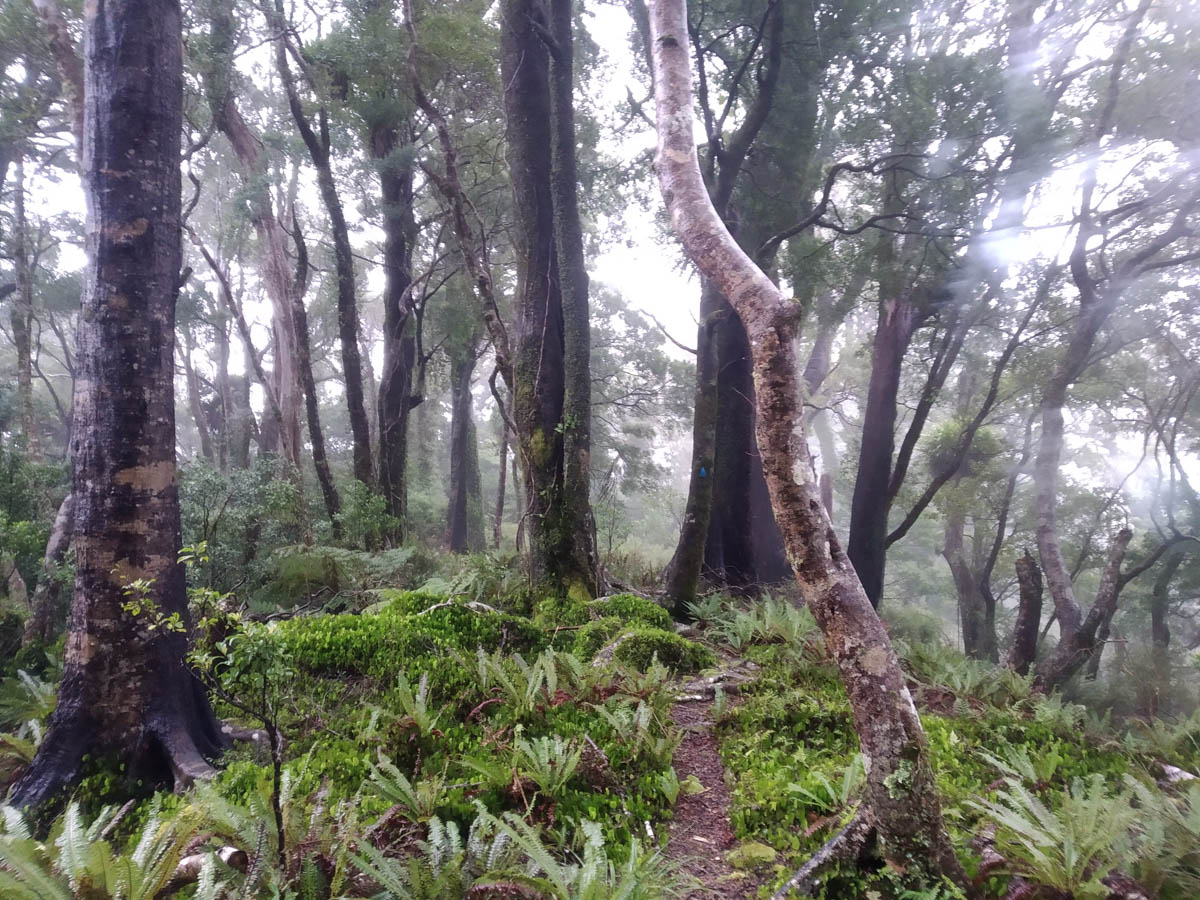 A solo fitness test to stay with family at Papatahi hut on a wet weekend has me looping the Whakanui tracks on this beautiful route, one of the best in the Remutaka Forest Park.

I start at 8:45 from the roadend. It’s cold and raining. Heading toward Wainui’s gum loop, I head up Nikau creek. An earlier trip I did on Bushcraft Wellington Meetup crossed a trapline on the ridge here, and I’m keen to follow it to the likely exit and make a loop that never doubles-back.

15 min up Nikau creek, there’s a little side-track (with ‘don’t cross here’ branches), marking the exit of a baitline. I don the gaiters, jump the creek and get climbing. This is the only creek crossing for the day, so worth taking the shoes off if you can’t get over without wet feet. In all but the wettest times I’d think a waterproof boot would be sufficient to not get wet.

It’s a slog for a good while, very steep. Has me thinking it might be a baitline that’s more a ‘downhill one’ than an uphill! Could have a better time joining onto this from the top of that Wainui gum loop instead.

Anyhow, whatever it eventually gets onto the ridge. I head SE. The trail is fairly clear, and beautiful stuff. Cruising on up to point 644 and onto the strange little bulge off the Whakanui track. Takes 2hrs to get up to the intersection of Whakanui tracks up here. Would be a nice little ~4hr daywalk to come up here and head back down. I don’t; I keep going up.

I climb on up, intersecting the East Whakanui turnoff at unmarked point ~820.

East Whakanui track is gorgeous, like last time. Quite muddy in the rain. A bit better travelled than it used to be with the expanding efforts of the Remutaka conservation volunteers! And better marked. I think of the first Meetup event I attended, and thinking Claire was pretty neat on this trail. <3

At the 600 saddle, there’s a new helicopter pad. Quite a nice little spot if it were sunny!

I toddle on down, enjoying a bit of quiet alone time with the brain. The forest is simply beautiful, the fog cuts through, the great rimu tower over it all; it’s just mint.

Getting into hunting, I keep a closer eye on the state of plants and look for any sign. The only broadleaf I see is broken branches down from the canopy, but the living ones have not been eaten. I only see one print on the whole trail, and it’s a pig. One possum poo near Papatahi hut. That’s it! I also noted that a lot of regrowth in places was Horopito (pepperwood) which deer like as little as we do. Wonder if that’s selective regeneration (deer would have eaten the other stuff earlier). I am finding the hunting knowledge and perspective really enlightening, and that it brings heaps more depth and quality to my experiences in the backcountry.

I test myself, estimating timing and when I’ll get to the turnoff off the ridge to Papatahi hut WITHOUT CHECKING THE GPS.

I check the GPS anyway, but I’m pretty much bang-on for time estimating and location when I spot the point at 444. I am surprisingly happy with myself. It’s incredibly clear now, compared with a few years ago!! Marked and labelled, can’t miss it.

It’s a quick drop down, some beaut bush and some sorry bits too.

There’s a bit of treefall and big stuff over the trail, but largely it’s easy enough to follow. Plenty of markers. Halfway down, something catches my eye. I think it’s a survival blanket, and wonder what’s up – then discover it’s where a party balloon ‘S’ floated to die! So they do come down.

I get to Papatahi hut after about 5:45hrs, around 2:15pm. I get the fire cranking, put a coffee on and read my book, awaiting my family. They’re coming in from catchpool, opting for the easier route. DOC say it’ll take 3hrs 30.

Papatahi hut is in great condition, with plenty of firewood, all the pots and pans and a ripper fireplace. I read the plaque about Gilbert McCaul, who bequeathed a bunch to build the hut and leave something wonderful for the rest of us who also love the bush. What a champion. Would be great if more of the Bob Jones’s of the world did that kind of thing.

I wait a long time. By 6pm I decide they must have seen the river and bailed, and that I’d have the hut to myself.

Dave, Al and Kris arrive at 7, and they’re well-spent. Took them 5hrs 45, same as it took me to come in on Whakanui!! While the river was high and dodgy, I think DOC’s 3hrs 30 is a bit optimistic.

I worried about them and the river, so was happy to hear Dave taught them and led the proper group river crossing technique I taught him at some point!! Though would have suggested the up and over emergency river route to 444 if I were with them.

I wake up before 6am, and quietly get up to boil the kettle. My cunning plan is to hurry the others along and try to beat the rain front coming in. But after their day yesterday, it doesn’t work! They do what they set out to do – enjoy their time in the hut!! So eventually I head off solo again.

The detour route back up the hill takes 30 minutes up, and about 45 down since it was so wet. The interface where the Whakanui Creek hits the river is kinda fun, as is the colour differences in the water bodies. The whakanui creek is high – knee high for me when I didn’t bother trying to find a better spot to cross – but clear and not that quick. So it’s well-fine to cross in all but the worst weather I’d expect.

Boosting up the Whakanui trail, I just love it. Such a variety of landscape, you go through every type of bush. It has to be the best track out there, even in this arsey weather. It’s colder and wetter than yesterday, so I don’t lay about too long and my phone is wet, so no good as a camera.

There’s heaps of water around. That skirting track of the Whakanui delivers, with awesome waterfalls (though it does require me to walk down the ‘creek’ of track quite a lot!

My knees start grizzling as I get down the bottom, and by the turnoff to Skerrets Creek (my usual entry point from here), they’re well-cranky.

I continue on, along an old bulldozed cutting that bounces along to the Hine Road carpark and remembrance garden. It’s about 30 minutes to walk that bit. Total 5hrs 45 again, exactly the same as yesterday. But much sorer.

Be wary of my timing here: I was solo! The others went out to Catchpool again. While I took 1:15hr to walk the emergency non-river route up and down to Whakanui creek, they took 3 hrs, and 7 to do their whole walk out to catchpool. Quite different from DOCs 3hrs 30 to Papatahi hut, and I expect they’re very much in ‘Type 2 fun’ territory about this one.

I loved it. Good to get out there again.

One thought on “Tramp: Papatahi Hut loop via Whakanui tracks (no retracing steps!)”