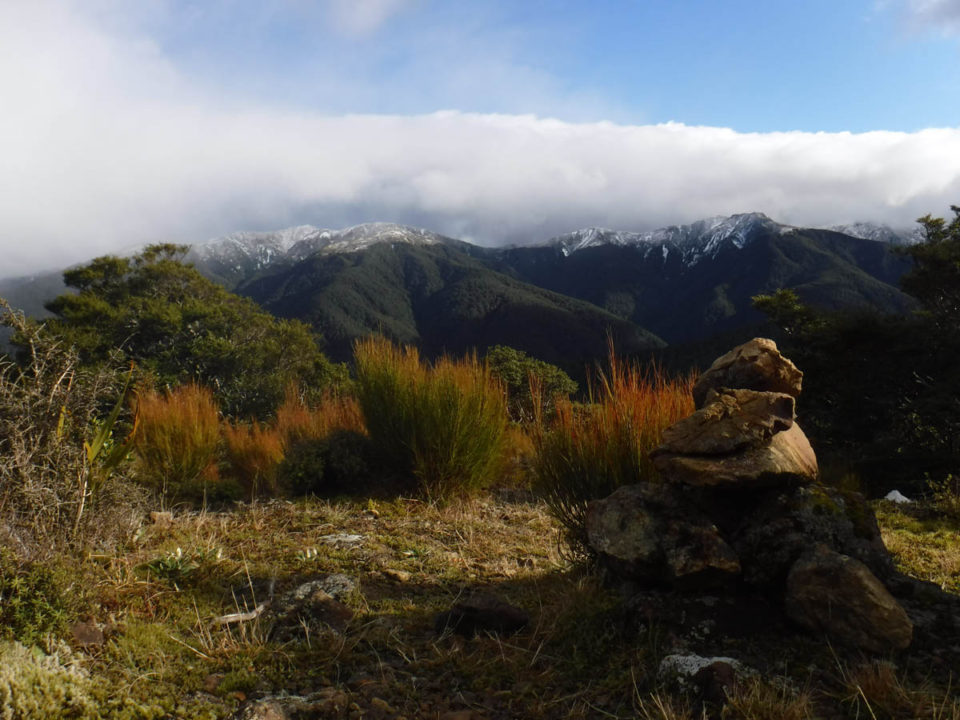 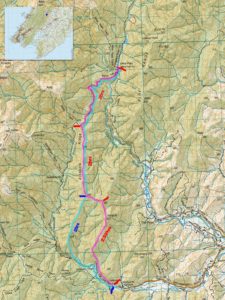 R eyeballs the Pinnacle Ridge in the mid-Tararuas as a place to get some off-track navigation practice. He collects some of his friends who’re keen to do similar, of which I am one – so I head off for the first trip I haven’t had to do anything for in ages. When you haven’t been in the back seat for a while, it’s pretty relaxing back there.

Piling into R’s car at 6am, I am lucky last. Our group is R, P and S. I’ve actually met P before, which he reminded me when I introduced myself, so that was great.

Leaving the Holdsworth Campsite road-end at 8:30am, we meet two old blokes and a dog. We talk where we’re heading and their experience is invaluable, despite it being some years old. ‘You’ll be right, provided you make the turn at 862. There’s a marker, and you’ll know all about it if you miss it’ one says. R asks about Winzenburg Hill and finds it was a living hell 20 years ago, so we scratch it off our list.

We don’t cross the bridge beyond Holdsworth Lodge, opting instead for the less trafficked path on the northern side of the river. It’s a trap line, loaded with every type of trap you can think of. 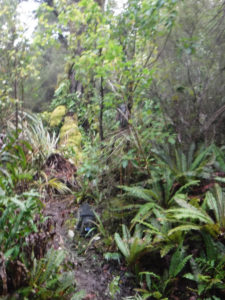 We make our way along the line a kilometre before climbing up beyond a slip. We figure at the top of the slip, we’ll leave the trap line, find the ridge line and follow it up. 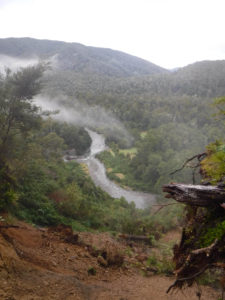 Donnelly Flat from the top of the slip

At the top of the slip the trap line continues to climb, still marked. So we follow that. And it continues to be marked once it reaches the ridge. And the track gets better if anything – we find there’s a legitimate track up here. We are all prepared with tents and gear for a night in the bush, after a potentially long days bush bashing and navigating. But that’s not going to happen – we’ll be taking this track along the ridge. So we do.

It’s a great track, and we reach the Pinnacle at 10:40, two hours after we left the car park.

The view from the Pinnacle 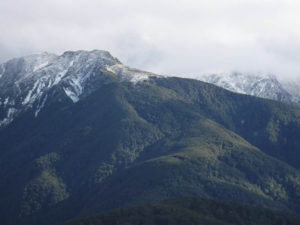 Jumbo Hut across the valley 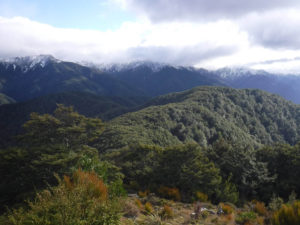 After a break we continue on.

Nearing 862, R and P have disappeared ahead, with S and I lagging behind. I’m a lazy blob and S is bringing 6 kilos of weights with him for training. We reach a peak where the track is covered in unnaturally stacked sticks, and there’s a random DOC triangle pointing West. This is the bit the old guys warned us about, and S and I see the backs of R and P disappearing down it. Our shouts go unheeded, so we wait a bit. They return, finding the track peters out to nothing in short order. 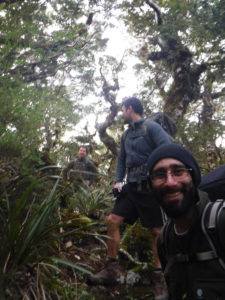 The dudes, looking back up at the ‘wrong way’ point

We cross the saddle to 846, and see our first unofficial sign at a junction (11:30, 3hrs from road). ‘Alternative route to Donnelly Flats – River Crossing Required’. These tracks are as good if not better than DOCs, it is a real surprise! 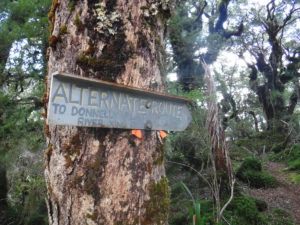 This route drops south to 864 and down.

30 minutes later we encounter another fork, this time for Atiwhakatu Hut. 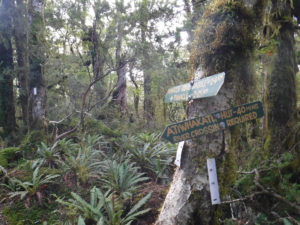 We stop for lunch in one of two wee marked lookout points, and continue north along the ridge. It’s quick going – it’s relatively level and the track makes it easy. The last kilometre or so requires the odd ‘where’s the track?’ examination as it weaves through fern on flat land, but we have no actual problem heading north and reach DOCs Barton Track at 1pm (4.5hrs).

I don’t really understand the ettiquette of sharing these things just yet, so I am not going to post what the intersection looks like. Suffice to say it’s there, but a bit anonymous and I assume that’s for a reason. Of course following this line of thinking I should be sharing nothing, so I don’t know – but it’s bloody obvious from Holdsworth, and not so much here, so there you go.

On the Barton Track now, we’re a bit tired and the ‘adventure’ has been explored. It’s hard terrain, and the track has its moments. Notably the couple of stream crossings, with brutal drops and climbs either side, and a massive fallen tree with no clear good way around. 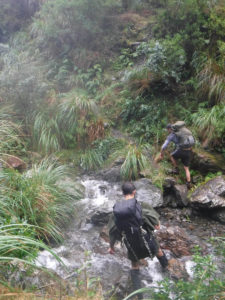 S climbing through the tree 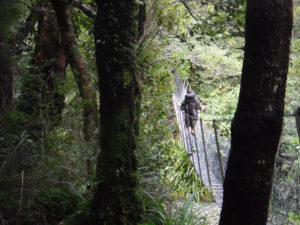 At 3pm we reach Mitre Flats Hut, 6.5hrs from the road and 2hrs from the Pinnacle ridge junction.

Mitre Flats is a ‘serviced hut’ in that DOC asks for 3 hut tickets. There’s no wood but what has been forraged nearby, and one candle left which we can’t be sure DOC put there. 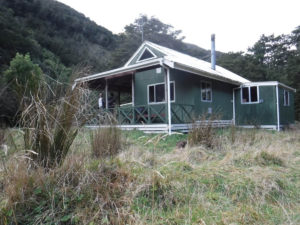 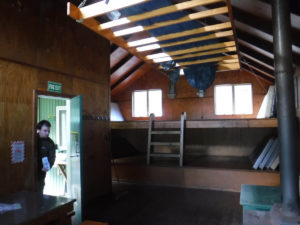 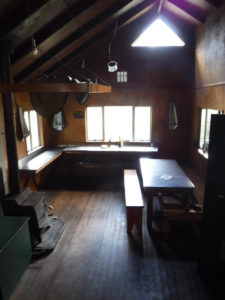 The wood pile is quite sparse, but there are some saws and we get to cutting firewood in short order. R asks if we’re all OK with him having a bit of a faff lighting the fire without fire lighting gear, and we have nothing else to do, so we settle down to watch. 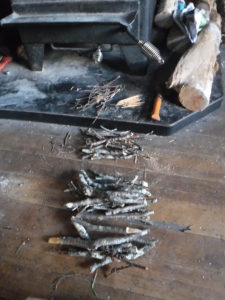 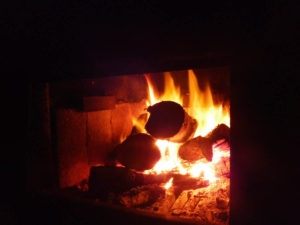 We have our own dinners. It is only here I realise we should have replaced S’s useless weights with beers or something.

As night falls, we huddle around the fire. The logs, I don’t know the type of tree, but they are dense. They sit for hours, long enough for us to give them backstories, and comment on each and every crack that forms. It’s daft but quite hypnotic.

We’re all dudes on this trip. It strikes me that I haven’t actually been on an all male trip before (not involving family). The dynamic is different, I find it interesting. I’m not going to list a bunch of generalised stereotypes here but suffice to say it’s all true, except that one you’re thinking.

In the morning we head out the same way by and large, but take the alternative route down to Donnelly Flat marked at 846. 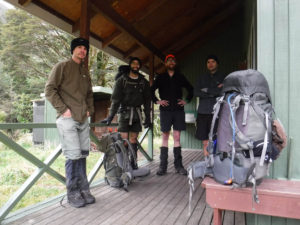 Our full compliment at Mitre Flats 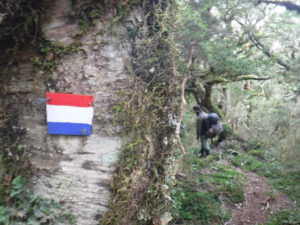 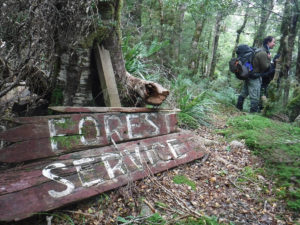 Relics of the Forest Service 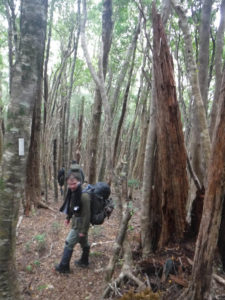 The beech(?) in the lower slopes 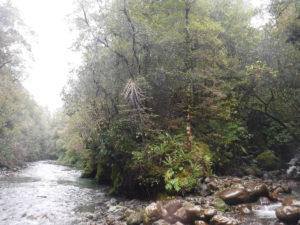 The final drop to the Atiwhakatu stream and unnamed tributary(n)

Reaching the Atiwhakatu stream at 1:30pm (1:10hr from 846 junction) we cross, getting our first wet feet of the trip. On the other side is a white rope, and a steep ascent to an old track. 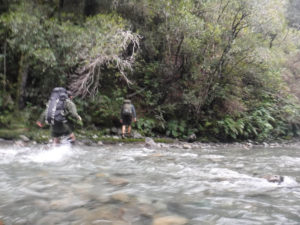 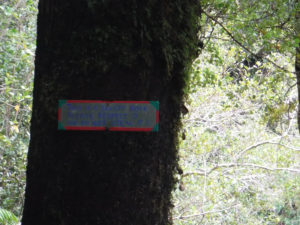 I always enjoy a ‘please don’t steal me’ sign 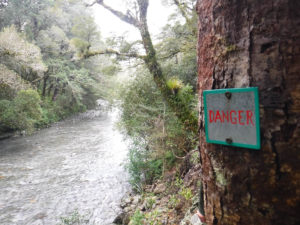 The bush is full of

This must be an old track to Atiwhakatu Hut – it is reinforced in places and pretty good. Soon enough it joins up with the main Atiwhakatu track (20min), and we fly out through Donnelly Flat and are back at the car at 2:15pm, 5:15hrs from Mitre Flat.

A great little winter adventure, discovering some of the hidden gems of the Tararuas not on the LINZ maps. I can’t wait to discover more.