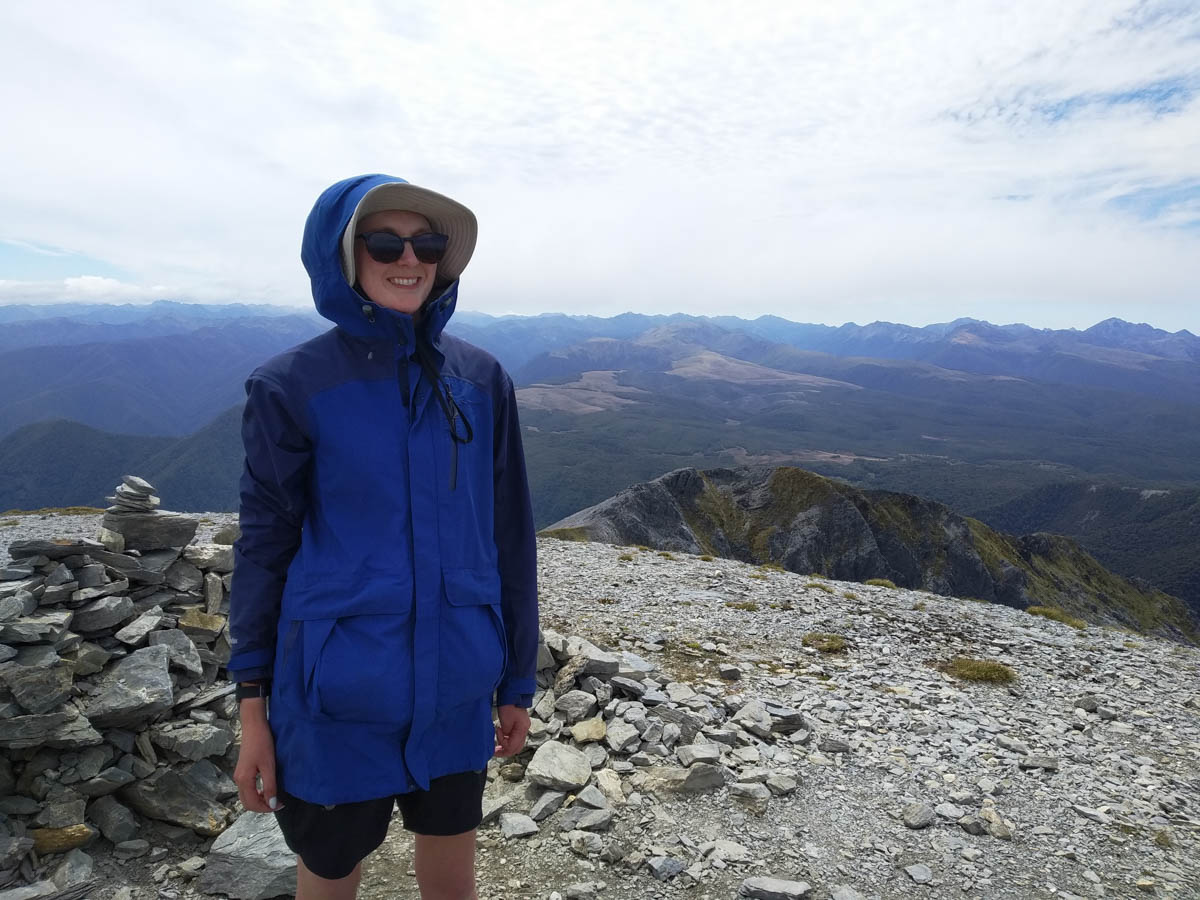 A much-recommended trail in the Kahurangi National Park with a lot of unique interest, Claire and I set out for two nights on the Tableland Circuit as part of our South Island Summer Roady.

The long, steep gravel road up to Flora is shrouded in mist at 500metres and completely lost at the carpark at 900. The car gets up alright, though I impale it on a rock at an inopportune time which has us worry about underside-damage, all seems OK.

So we set out in beautiful mist, slowly burning away in the midday sun. Claire fortunately notices the kilo+ of flat rocks (future coasters) she collected in her pack before too long, so we secret them behind a Friends of Flora pest-trap to collect on our way out.

We stop for a bite at Flora Hut, the twin rooms looking highly inviting. But this time we’re not injured and going further!

We follow the road along to the Gridiron Shelters. The road is very much a road, and the Gridiron shelters and Flora hut have their firewood delivered along it. The likes of my Dad would enjoy mountain-biking out to check out these shelters I think – it’s an easy ride and a great payoff – the gridiron shelters are something else! Making use of great rock outcrops, improvised huts and/or amenities have been added to bring more comfort to these natural shelters.

Lower Gridiron Hut is a three bunker. A custom-built swingseat hangs from the rock overhang, perfectly fitting a DOC mattress. From here you can look out at weka pecking about beyond the open firepit – it’s the kind of view the most ancient of humanity would have had, peeking out from rock shelters. Very special. A big part of me wishes we just stopped here for the night!

Further along the road we visit the Upper Gridiron Shelter too. Less of a ‘hut’ and more of a natural experience, a sleeping platform and a dining area with great outdoor flow sit beneath a massive rock with a stream gurgling nearby.

The road ends here, which seems an odd place for an old uplands road to terminate. So we continue on a well-graded thinner route, which was probably a horse trail such is the quality of the cut and it’s constant grade.

We leave the bush and arrive onto the Salisbury Open, a grand expanse of tussockland. Up here is where the unique geology of the place really starts to stand out – the whole plateau is ~30 million year old ocean remnant, or something like that. It’s limestone and water has slowly dissolved it, leading to countless sinkholes and massive cave systems. So we keep to the track!

We take a short detour to check out the Dry Rock Shelter. Similar to Upper Gridiron but more peaceful, graffiti carved into the rock goes back to 1929 that we noticed. That’s cool – the graffiti from 2020 is a bit lame though – leave it to the history folks.

We arrive at Salisbury Lodge to discover a large gathering of young people. Gross. They’re a bunch of homeschool kids, polite and friendly, but expecting more to turn up and clearly jonesing for a good (loud) time. A couple and kid are here, and they’ve pitched a tent instead of staying inside. We do the same, after a long search for a flat bit of land to pitch that isn’t the site of long-drops long-removed.

As dusk settles, two elderly people pop out of the bush – they’re wardens, appearing from a nearby NZFS 6 bunker not on the map and just for wardens and DOC folk. They’re great and we have a good yarn. That road to the gridiron shelters I thought stopped in an odd place, does indeed stop at an odd place – the work was stopped! Back in the day, some NZFS people decided they’d like to graze sheep up on the plateau and set to work bulldozing a road in. The work only stopped once head office got wind. Crazy days back then eh, the entitlement of the backcountry folk of old!

The kids are bloody annoying as expected, shining laser lights on the tent, flying drones around, yelling at each other going to the toilet and so on until about 12am. For some reason I don’t really mind this time, I’m kinda happy kids are out enjoying it. I do wish big groups like this would camp rather than 100% dominate public huts, but I suppose that’s just part of the me-me-me culture we have. We could have, should have camped further away!

In the quiet of the morning I do want to punish them, give them a taste of that inconsideration. I prop my pot above the bench, ready to make a din out of making coffee – but I just can’t. Can’t do it. Instead I boil water outside and enjoy the quiet morning, the birds breezing by. A peaceful morning cuppa is so much better to savour when you know the peace isn’t going to last.

When the kids awake, we’re pretty much ready to go, so we head down the Potholes track. It’s called Potholes, because of all the potholes! Cavers and Spelunkers must love this area – it both interests and scares me how big the cave systems must be beneath this ancient limestone landscape.

These open grassland bits were what they were going to graze sheep on. As we climb Gordons Pyramid, the forest reasserts itself, and we have these massive potholes within the forest. Treacherous off-track around here!

There’s a bit of a gale blowing, and views come and go as we cross the Pyramid and drop through the Horeshoe Basin. Around point 1380 has one real demonic moment, with the track heading over a big rock. Not sure how to climb it, we try to go around, and end up following a route a goat might have taken, maybe 20 years ago. Spaniard speargrass (Taramea) absolutely savages our legs, we’re like bloody pincushions. But we get up. Unfortunately the lovely duo behind us (who suffered through the hut-party lastnight) followed our route and also had a meal of that bit. But the rest is fine.

At the intersection of the Mt Arthur track, we stop for a snack and debate summitting Mt Arthur. We have the time and we’re halfway there already! So we rearrange our kit, take one pack up as a daybag and clamber up to the peak at 1975 – which may be the highest peak I’ve climbed (though the car did most of it).

It’s a challenging scramble at times – bare mountain country isn’t really my interest or jam I have to say – but it’s brief and interesting enough.

Leading the mountain and it’s growing ominous cloud behind, we visit Mt Arthur Hut and find a lovely family with two young kids happily ensconced. They’re a really cool couple, and there’s a few other folk poking around too. With little room, we pitch up the tent again. Weka poke around, and make off with our tenting-neighbours food box, dragging it down the hill beyond the hut.

A kea visits, picking about in the canopy above the hut. It’s a pretty great spot!

In the morning we just wander on out. The Mt Arthur track is a nicely graded graveled beauty and chokka with daywalkers. It only takes an hour to get to this hut from the roadend, and a little further to get to the tops – that’s even better than Field Hut at home.

Minutes from the carpark, an old tramping pal MB appears. She was there when Claire and I met so that’s fun. She’s gas-bottleless having flown in, and we’re leaving, so that’s serendipity – she finds herself a gas bottle.

A brilliant, varied loop tramp across such unique country in all senses. The recommendations aren’t wrong – this loop is one to do!

If you’re interested to visit, check out this great DOC brochure.