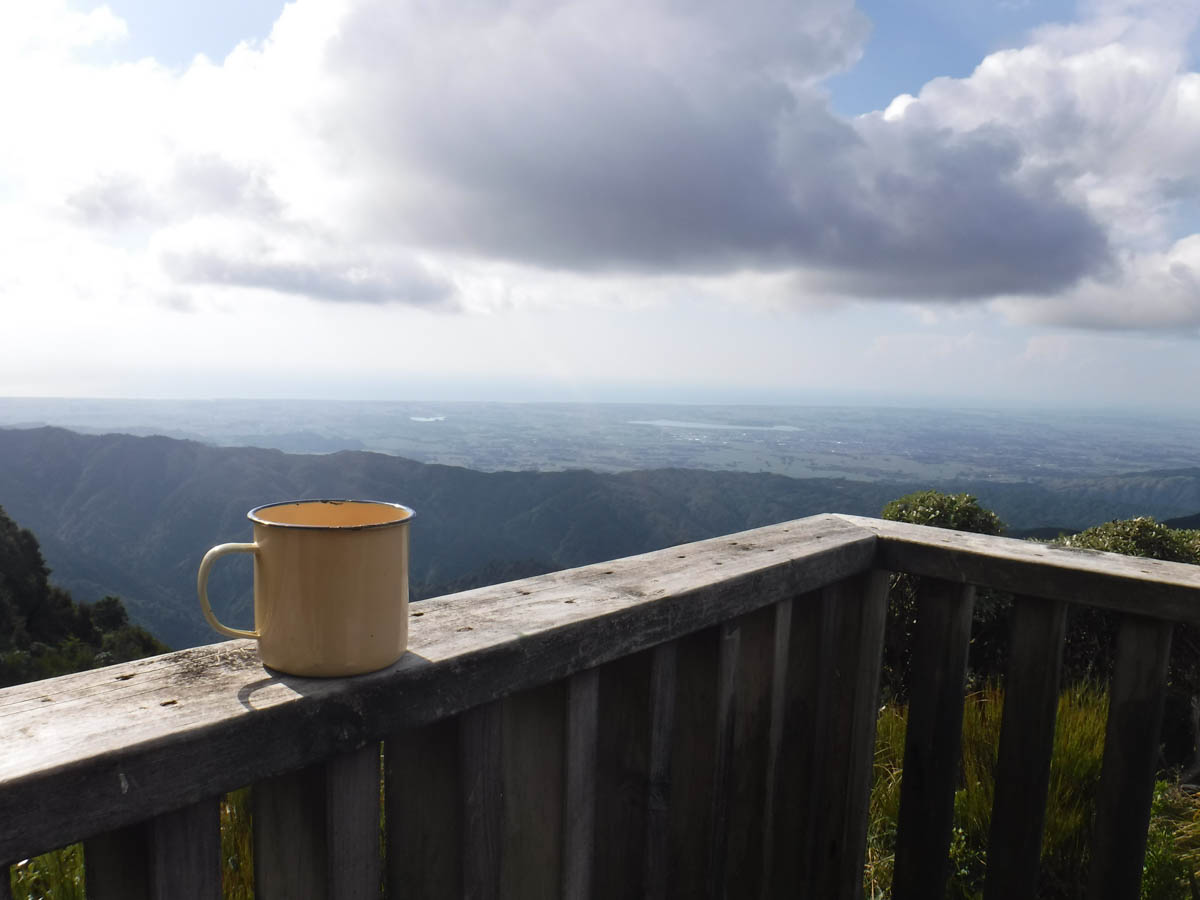 I have decided to write ‘trip reports’ for my tramping, for future reference and because I find those written by others very handy. This first one will be me figuring out how best to do it. A bit less ‘travel writing’ and more ‘useful information concisely’ perhaps, if I can convince myself!

I reached the hills this time via Poads Road, 10 min inland from Levin. A short gravel road, accessed via a thin bridge. The carpark is full; I pull onto grass and nose into a small ditch. Next to me are a couple gearing up with two small dogs.  The dogs have a lovely gentle nature, and little legs; but they’re heading where I am.

Setting off at 12, bush access is across 15 minutes of private farmland, the route marked by blue poles and easy fence stairs (140m). I test my mettle eyeballing dairy cows then sheep. Further along there’s a memorial to the trampers who opened up the northern Tararua access back in the day.

Crossing a final stile, the track forks without signposts. The left heads to the river, I stick right, and am shortly in the bush. Minutes later there’s another fork – sign-posted this time. To the left, skirt the Ohau river gorge then drop down to the riverbed for access to North Ohau or South Ohau huts. The right leads to the Waiopehu Track.

The track starts with a steepish 75metre climb – I think this track may be more than the gentle ridge I imagined! It’s difficult track for little doglegs, and I catch the couple ahead of me.

1.5hrs later (1:30pm) I arrive at another split at the end of the ridge (480m). To the left, drop down to the Ohau gorge track (this is the Six Discs Track), or keep heading up the ridge.

From here on the climb softens and follows the ridgeline. It is considerably easier. The track is clear and simple to follow, I had no moments of even temporary indecision. Even in the dry weather the track is quite boggy.

After 2hrs (3:30pm) I arrive at a small summit, with a rimu painted pink. I don’t know which peak it is, so it doesn’t help me figure out how much longer I have to go. (hindsight: I think this is the 712m).

Five minutes further I come across a small helicopter pad neighbouring the site of the former Waiopehu Hut (completely demolished 2002).

I leave the bushline at 4 – the track is muddy but easy to follow.

Not knowing how far along I am, I know my map said 5-6 hrs to the hut. I have an hour to go, and about 200ml of water left. I mentally prepare for a sweltering finale, then round the corner to find Waiopehu Hut minutes later at 4:15pm.

We have a great evening together; it’s a grand hut, the weather is still and warm. There’s full cellphone reception (a curse!) and views all the way to Palmerston North and maybe Bulls. Though there’re kennels for dogs, the visitor book is pretty heavy on the ‘TASB’ (Te Araroa South-Bound) guests. Many a note of people staying longer to avoid the atrocious weather and lamenting the lack of heating, so it can’t always be this lovely!

I reach Richard’s Knob at 9am (1.5hrs). There is clear signage to help you onto Gable End Ridge.

From here it is a see-saw of mini summits. The track is fairly well trodden, but not to the state of the Waiopehu Track on the opposite ridge (being part of Te Araroa, probably gets more traffic). It’s only fallen leatherwood and others blocking the track though; on the whole the track is extremely boggy but clear. I had to drop to my knees only once, the rest of the time a clamber over was fine. Managed, by a hair, to not get mud in my boots – in wetter weather this will not be possible!

At 9:55 I crossed an unofficial track to South Ohau – not sure where specifically but the timing may help.

It’s a relentless drop to the Ohau river, but none of it particularly steep and horrid – just a constant grind (as much as a walk in the bush can be a grind).

Once you reach the bushline the track is marked more than tracked at times. It’s fairly clear, but I did have to search once or twice to regain the route after navigating fallen trees.

At 12 I reach the crossroads before the bridge. There’s a nice grass clearing just north of here, a fine spot for lunch (or on the river). Note: the track cuts left (west) from this clearing, NOT the closest bit to the river bank. If you want to lunch by the river, head toward Ohau hut – you get to the river straight away really, and stream access from the bridge area isn’t great.

After lunch, at 12:30  I cross the bridge (I heard it was closed but saw no signs of that – totally fine) I pass the other end of the Six Discs track.

All up, 4.25hrs in and 6.5hrs back. Nice loop, with mix-up options with South Ohau hut. Don’t forget plenty of water – both routes are ridges. I cut it a bit finer than I would have liked on the way up, with 1.5litres for the climb at 22degrees or whatever it was. Day 2 with the same was fine though, despite being longer (earlier start, and downhill).