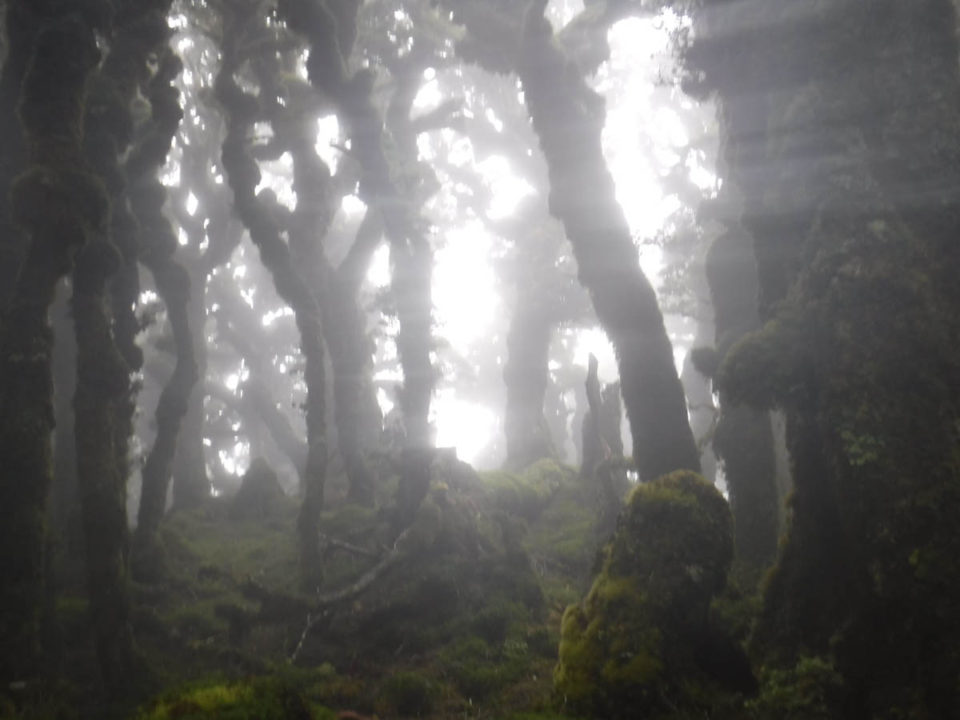 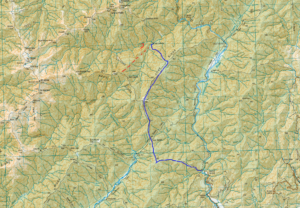 The forecast is dire – OK on Saturday, but then rain rising from 8mm to 45mm as Sunday progresses. I have my mind set on an adventure, and it’s the only one for just me for some time, so I plan a trip with no unbridged river crossings – a trip to Neill Forks Hut from Waiohine Roadend.

Passing through Greytown at 11am, I neglect to buy lunch – it’s not lunchtime. This is foolish, and I begin the track on just my breakfast and one lunch for tomorrow. There is only one other car in the carpark – did I miss the memo? 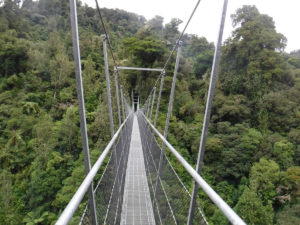 Over the Waiohine bridge, I turn left (south) onto the Cone track. This promptly climbs 400metres to 572, up clay and leaf litter. From here it flattens out and one can get some pace up on this very clear track (just one or two big fallen trees to navigate). Heading over the small 682 peak, I head north toward Cone saddle – passing the southern Cone Hut track at 12.50 (1hr 50) and then dropping smoothly to Cone Saddle at 1:10 (2hrs 10), 566m. 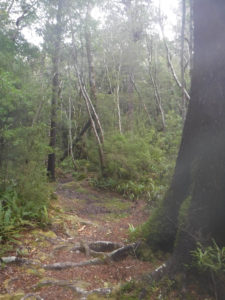 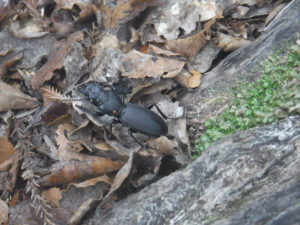 Yo dawg I herd you like bugs, so I put a bug on yo bug 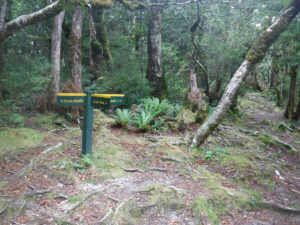 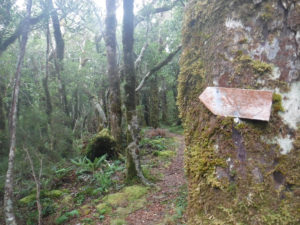 Maybe this neat old rustic ones 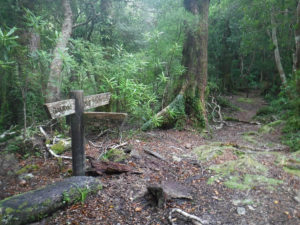 These old DOC ones are the business too

North of the end of the saddle, the Cone ridge track sidles up the bank (unsignposted but marked). It is not as clear as the saddle tracks, but easy enough to follow, climbing to 812 then on to Cone’s small bit of ‘tops’ at 1080m, which I reach at 3:10pm (4hrs 10). 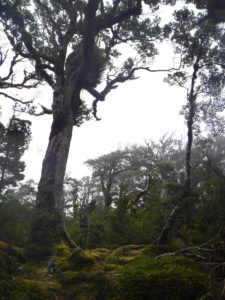 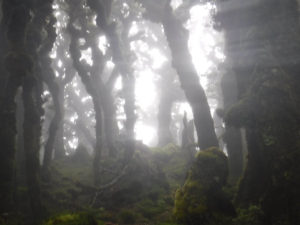 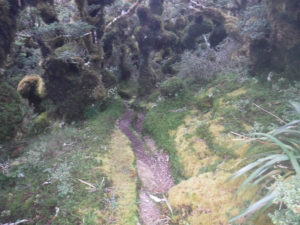 The DOC sign on the tops is missing an arm, and there are no bolts holding it in. It is roughly pointing the right directions, but I don’t trust it – some dick could have spun it around. I head to Cone’s true summit, to the east of the track. I bumble about over there a while, finding random stuff and no track. 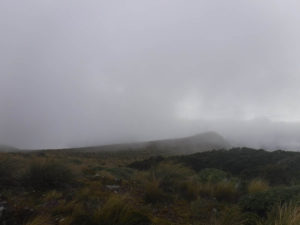 I realise now, I don’t really know how to navigate in fog. 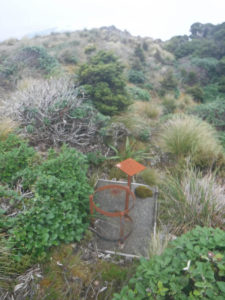 Thought this was an orange marker until I got over there

I wonder whether descending back to Cone Hut is a better idea – but eventually look at my compass and follow the obvious track heading along the ridge to the north, which I assumed was the Neill-Winchcombe track (it’s not – that’s where the sign is pointing, go figure). This farting about takes about 20 minutes.

There’s a picturesque tarn on the northern Cone ridge track. 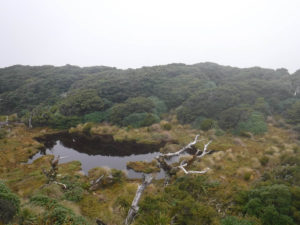 The northern side has gentle slopes, all goblin forest. But first there is some steep sidling along the eastern edge of the ridge. The track is followable for the most part – but do keep ones wits! I walk through countless spider webs up here, and figure I will have the hut to myself.

At 5pm I reach the Neill Forks turnoff (signposted), 6hrs. With just snacks eaten all day, fear of solo venturing into the unknown, gathering darkness and general anxiety I am feeling not amazing. But it is too late to pike out to Totara Flats or something, and with the impending rain that might just make me climb the ridge again tomorrow; I head north west and down toward Neill Forks.

This path is punishing. Dropping 600metres in about a horizontal kilometre, it is unrelenting. Fairly easy to follow, though there are some fallen trees requiring navigation (on the whole, others have marked the alternate route with their wear pattern).

I begin to stop frequently. My legs are shaking. But at 6.20pm (1hr 20 from Cone ridge) I reach Neill Creek and shortly thereafter Neill Forks Hut. It felt like a lot longer than the camera timestamps tell me. 7hrs 20 all up getting in.

I notice boots in the verandah; damn. My dream of defeating my fears AKA being scared shitless alone in the middle of nowhere all night are dashed.

“You’re not who we are expecting” is my greeting from the two already there. There were only two cars in the carpark at Waiohine Gorge, and we’re both here – bugger! The chap they were expecting arrives shortly after me.

Ice is broken (even better after dinner is eaten) – they are a trio from the Manawatu Tramping Club. They left earlier (9:30am) and dropped from north of Neill Saddle, as marked in red on the map (I think) – hence why the spider webs were undisturbed. 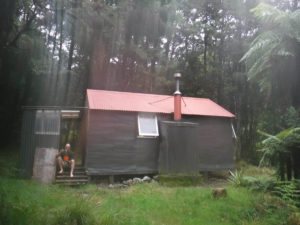 Neill Forks Hut + I, one of the MTC folks and faster than sonic 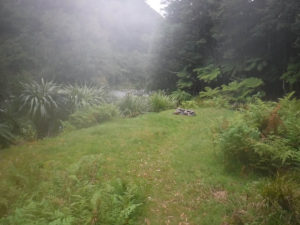 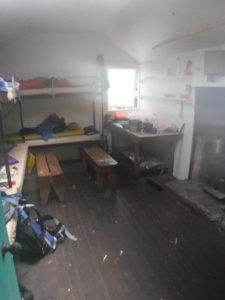 I read a little, and enjoy some chocolate treats from the Manawatu – I felt a bit delicate so this little touch of kindness is very much appreciated while real food works its fortifying wonders.

Sleep is early yet awful. It is stinking hot. The old metal bunks creak and groan. All muscles in my legs and feet twist and cramp, busy repairing themselves from their nutrientless ordeal. I feel guilty trying to stretch the cramps out, rocking the bunk as it does. There is rain in the night, but not much.

Getting up at 6am, the others follow suit. I eat a triple portion of my porridge to fortify myself – I, like many in the hut book, am not looking forward to the departing ascent.

As chance has it, we all leave at the same time (7:20am), and I become a follower of the Manawatu Tramping Club, tagging along in the shadows like Gollum or something. 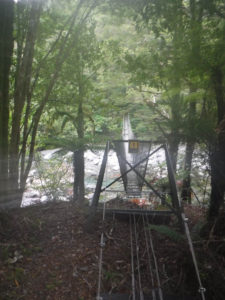 The bridge to Maungahuka / Concertina Knob. Neill Forks is one of the ‘rain getaway routes’ for inland Tararuas it seems

At 9am I reach the intersection with Cone ridge track (1hr 40, vertical!) then keep roughly behind the MTC crew heading back up Cone ridge. Having a group to keep up with (they are most gracious) keeps the pace and motivation up a little. I get some beauty views of the Tararua Peaks – where is this rain?! At 10:10 I am back on the Cone tops. Stopping for a quick snack with the MTC, we watch the rain move onto us and drop into the bush. 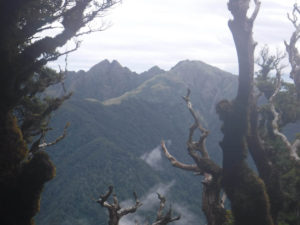 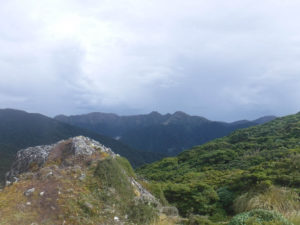 Bombing on now, the wet clay and leaves above the Waiohine bridge are a real bastard but the rest is quick sailing. I forgo my crap lunch in favour of a Greytown pie (I could have eaten this dumb lunch yesterday instead of carrying it up and down!) and reach the carpark at 1:30pm making the return journey 6hrs 10min. Quite a differential from yesterday’s 7hrs 20 – clock that up to hunger, being alone and increasingly mopey/freaking out, a few hundred metres less ‘climbing’ and keeping up with a group on the way back.

Big thanks to the Manawatu Tramping Club folks for having me tag along a bit on their outing. It was much appreciated.

This trip, I had wanted to challenge myself. How would I handle this length, this amount of isolation, alone? I got a taste of the answer to that enroute to the hut, and it wasn’t great. Don’t recommend. But I think the not eating and ‘fear of the unknown’ regarding navigation and weather knowledge had big parts to play so I will have to do similar again, but eat lunch first (what a dumbass).